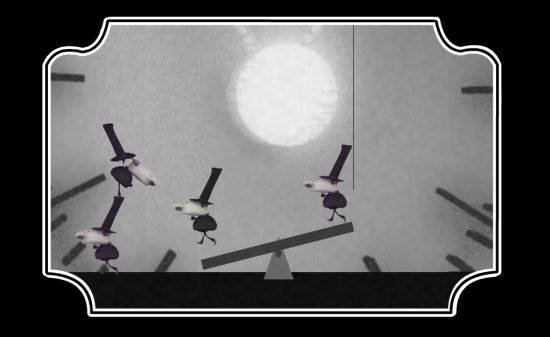 Of all the nominated games I saw at last night’s IGF, one in particular stuck out in my mind the next day — not because the gameplay looked great, or the graphics looked sexy, but simply because I didn’t know what the hell it was about. That game was The Misadventures of P.B. Winterbottom (how can you not love a game with a title like that) and, curious as all hell, I headed out to the IGF show floor to get a glimpse of it.

As it turns out, it’s a platformer puzzle game in which the player is simultaneously hero, villain, platform, and tool.

Don’t know what the hell I’m talking about? Hit the jump to read more about this incredibly interesting student project.

Basically, Winterbottom is a platform-puzzler which uses quantum physics and cloning as its main gameplay mechanics. In order to solve puzzles, the player has to complete one part of a puzzle while hitting the “clone” button, then release it. The clone will loop back to its original position and continue to do the action over and over and over, at which point the player can either make another clone to do another part of the puzzle, or just do it themselves.
If this sounds a lot like Jonathan Blow’s Braid to you, then you’re not alone. I asked the lead designer about the similarities, and he responded that games like Braid or Cursor*10 or Winterbottom all use time as their main gameplay conceits, but that each game uses the mechanic in a totally different way. Braid‘s time conceits are varied but usually helpful; Cursor*10‘s exist to make the player cooperate with himself ten times over. P.B. Winterbottom differs from the other in that the Winterbottom clones can always be interacted with, regardless of their timeline. If you make a clone of yourself jumping up and down, you can jump atop your own head to get an extra boost. You can literally make a ladder of your past selves to reach high areas, or smack your clones into the air to reach difficult areas.
We were also showed a really, really cool bit of design where the player is forced to collect an evil, red pie. After doing so, an evil and deadly clone of the player is spawned, who continually runs over the exact same path the player took to grab the pie the first time around. Since another evil pie spawns after the player collects the first one, the player has to find a way to collect the next pie without running into the past version of himself. Collecting the second pie spawns another evil clone who runs over the second path, and the evil clones just keep building up and building up and the player has to constantly find ways to avoid the older versions of himself.
In other words, it looked fucking awesome. Winterbottom, with its general mechanical similarities but assuredly different design differences, showed me that indie developers actually managed to create an entirely new genre: the time manipulation game.
Think about that for a second.
A group of developers, working for very little money in very small teams, actually managed to invent their own fucking game genre. If that doesn’t strike you as completely mindblowing, you’re really missing out.
The game isn’t available for play yet, unfortunately (we were promised a May release date, as the game has to be done by the USC deadline), but it’s definitely a title you should keep your eye on.