We had a chance to play Naruto: Ninja Destiny for the Nintendo DS this morning, and fans of the series will be glad to hear that the portable pummeling action is a blast — and not a drag.

This game is an upgrade to the 2006 release Naruto: Shinobi Retsuden, a 3D brawler which was appealing to fans of the franchise, but ultimately disappointed with low frame rates and poor response times. This is no longer the case, as framerates have been upgraded to a silky smooth 30 frames per second.

The character roster has been upgraded to sixteen characters, each of which have undergone a visual, cell-shaded upgrade.  The end result is a really slick-looking 3D fighting title — something the Nintendo DS could use more of.

Hit the jump to read more on Naruto: Ninja Destiny.

I had a chance to battle a D3 representative via the game’s local wireless multiplayer mode. Of course, he kicked my ass, but I had fun trying to fend him off (you’d think he would let me win, though). The bottom screen of the DS doubles as a series of buttons that you can thumb during battle to regain health or use a special attack, and while I was mashing those power-ups like nobody’s business, I still lost. 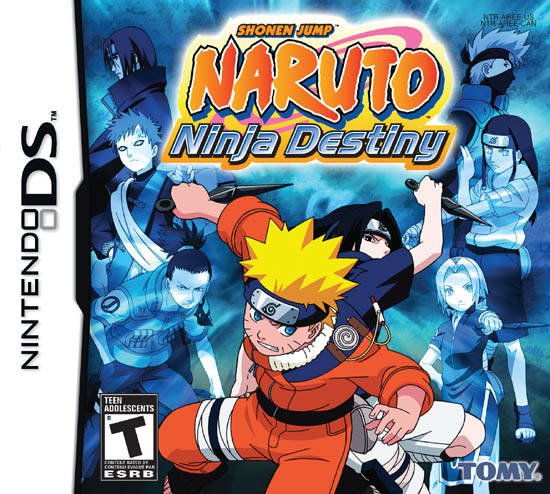 Gameplay is similar to other Naruto fighting titles, though things seem to be a bit faster paced and focused. It still holds true to the “easy to play, hard to master” control system that past games hav ehad, Also like the other games, the special and finishing moves are crazy and over-the-top, and they’re a great in-your-face taunt to provoke your opponent.

I’ll state again that those that have heard of the Japanese version gameplay issues need not worry, as they’ve been ironed out. Naruto: Ninja Destiny launches next week, February 26th.