I think GDC took place in Bizarro World this year. Forget all that talk — that is just PR spin to throw everyone off the scent. How else can you explain my slight disappointment over the beautiful, retro, high-definition XBLA remake of Bionic Commando and my surprise excitement over the upcoming 3D PS3/Xbox 360 version? (Also, nowhere else but Bizarro World would I ever utter the phrase “I want to put a baby in you!” But that is a story for another time …)

When the new Bionic Commando (yup, that’s the simple, old school title) was announced I immediately felt a Bomberman: Act Zero vibe. How dare they update one of my favorite games of all time with generic “hardcore” graphics and post apocalyptic setting?

Surprisingly, though, I kind of liked the demo I saw. Granted, I didn’t get to play it (the game is so early in development it was played by one of the art designers), but what I saw looked pretty fantastic. Scroll a little down the homepage for my hands-on with the 2D remake and hit the jump for my initial impressions of the 3D version. Bionic Commando overload!

I’m telling you, I was really not excited about this new Bionic Commando. Of course I always wanted an updated version of the classic NES game, but the short trailer that was initially shown just seemed a little “too cool for school” for my tastes. Like I mentioned earlier, Bomberman: Act Zero entered my mind. And I never want that game in my brain again.

Luckily, the demo shown to me in a private session at GDC looked like the perfect update to the amazing series.

Most importantly, the grappling hook plays the biggest role in the game. Almost too big a role, to be honest with you. There was so much swinging action in the demo that I almost wondered if they was anything else to do. 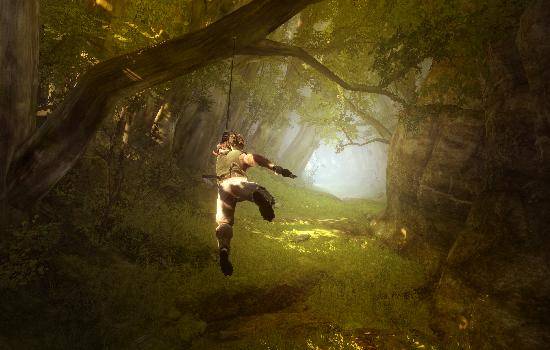 Actually, let me start by telling you what impressed me right off the bat. The first level shown was this ruined city that I assumed had been decimated by a nuclear attack. As the main character made his way through the level, a huge building in the background started collapsing. “Wow, that looks cool,” I thought to myself, but I figured it was more of a visual stimulation than anything that would affect the gameplay.

Well, as the level continued on, a huge dust cloud that was formed from the destruction started making its way down the corridors of the city, right towards my character (eerily, it was very reminiscent of 9/11). Instead of all of this going on in the background, the dust eventually reached the main character and covered the screen — along with blowing pieces of paper and trash. This dust completely cut down the visibility of the level and made the already challenging jumping and fighting even harder. Eventually, the dust started to settle, clearing the screen and actually leaving behind some particles on the platforms.

The entire sequence was incredibly detailed, especially for a game in such an early stage of development. While it had nothing to do with the main grappling hook mechanic, this sequence impressed the heck out of me and really set the tone for the entire demo. After seeing it, my interest was perked.

I wish I could have played the game myself, but I seemed to get a pretty good idea of what was going on from just watching the designer lead me through the first two levels. 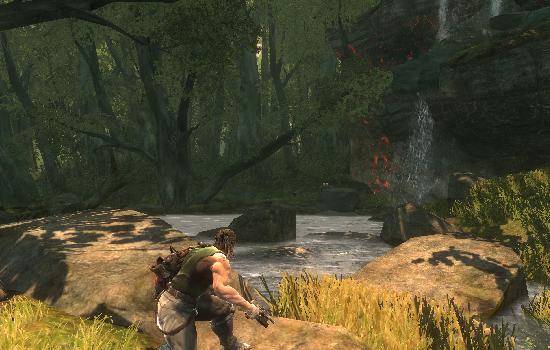 Action obviously takes place from a 3rd person perspective, with all movement mapped to the analog stick. While there was quite a fair share of generic (and fairly disappointing) gunplay in the demo, almost all of the on-screen antics involved the amazing new grappling hook. Unlike the original 2D game, there is no restriction on what direction your grappling hook can be fired. Also unlike the original, the grappling hook in this version is long. Like, really long.

A cursor on the screen signifies where your grappling hook will be shot. When it is moved over an area that can be grappled, the cursor changes from gray to red. Immediately, I asked the designer if it has to be 100% accurate, as the world is so detailed, having to shoot your grappling hook onto an exact point could be next to impossible. My question was immediately answered once the designer showed me how the cursor basically “locks on” to everything. If you just move your cursor over a ridiculously skinny light pole, for example, it will hover over top of it no matter how much you move around, guaranteeing that your character will garner a direct hit. 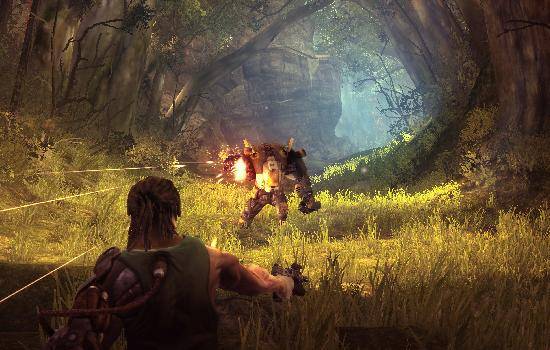 Admittedly, there wasn’t much to the demo besides swinging around and using the grappling hook for some last minute saves, but, fortunately, there were a couple of cool little features I got to witness:

-By shooting the grappling hook onto an enemy, instead of the bad guy being pulled towards the main character, the main character actually launches himself towards the enemy, kicking him in the face and sending him flying across the screen. This was only one of the special attacks performed by the grappling hook, but a large amount more are promised in the final game.

-At one point, the designer and producer actually shut off the monitor for about 20 seconds. It was right after latching onto a clever-looking contraption with the grappling hook. They said they didn’t want to show that part yet, but I can only imagine how cool it would have been. When asked if puzzles would be a big part of the game, the producer cryptically told me that fighting and swinging were definitely not all you could do. Hmmmmm …

-When fighting a jungle boss, the grappling hook was used in so many different ways. The main character could fling huge boulders over his head at the enemy, use the grappling hook to rip off different pieces of armor, and even swing all around the area by grappling onto almost anything. The freedom of movement (especially when incorporated into the level design) was very impressive.

The one thing the producer and designer wanted me to know was that the game was not a generic copy of Spider-man. While I can understand how people would think that, seeing the game in action makes me agree with them. The two games do look very similar, but there just seems to be so much more you can do in Bionic Commando.

Graphically, Bionic Commando looks amazing. Again, it is still in a very early stage, but everything — from the textures to the lighting — felt near complete. I can’t imagine how much better everything is going to look as the game nears completion. From what I saw, I would compare the style and look to something like Uncharted: Drake’s Fortune. And that is a very good thing.

Once you see the scope and scale of everything, I think you will agree that Bionic Commando is turning out rather nice. Even from the two short levels I saw I can already tell that a lot of love and attention are going into everything, from the addictive grappling hook mechanic to the graphical details (I am still reeling over that awesome dust cloud).

The designer assured me that everyone involved in this version of Bionic Commando is a huge fan of the original. As a fellow fan, I am happy to report that I think he is right. Like Metroid Prime before it, the game seems to be the perfect 3D update to a classic 2D game.