Oh my God, YES! After my near orgasmic post yesterday concerning the hardcore crush (pun intended) I have on indie game Fez I finally got a chance to play it here at GDC!

Fez seeks to expand on the already cool 2D/3D transitional gameplay of games like Super Paper Mario and Crush by allowing the player even more control over the revolutionary perspective switching mechanic. With a nice Cave Story-esque retro look, the game rocketed to the top of my must-play list after only seeing yesterday’s short, hardly revealing video.

But was Operation: Play Fez a success or did I leave disappointed? It is me who is typing this, so the reaction was probably a little bit on the positive side. But hit the jump anyway for my hands-on impressions. Maybe I will surprise you (hint: I won’t).

Just be warned: I am about to go insane over Fez. Terms like “amazing” and “best game ever” are going to used way too much. I apologize in advance.

The only mildly negative thing I can say about the good chunk of time I had with Fez was that there wasn’t enough of it finished! Goddammit, amazing developers, get with the program! I need more!

Since the game is only barely complete, the video posted yesterday was pretty much the only level in the game available to play on the floor as well, making the whole thing more or less a glorified tech demo than a full-fledged narrative-filled experience.

The level I did get to play, though, was, in a word: perfect. 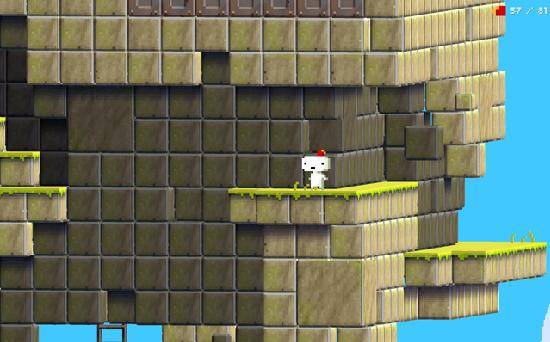 First off, the graphics, although simple, are exactly the kind of style I look for in a videogame. Cave Story comparisons aside, the bright colors and glorious animation (so good!) work perfectly, creating a rich world that begs to be explored.

But I know what you all must be interested in: how does the 2D/3D gameplay work and, more importantly, feel?

I played Fez using an Xbox 360 controller (although the game was originally created for the PC), leading me to believe that it will be an XNA game and therefore available on Xbox Live Arcade. When asked about this, the creators of the game (who I think are my new best friends) said XBLA seems like a strong possibility. Yup, my head pretty much exploded when I heard this amazing news.

I have no idea how it would feel on a PC, but the Xbox 360 controller seemed the perfect fit for the mind-bending gameplay. Normal action is, of course, controlled with the left analog stick, with the “A” button being used to jump.

For the first small chunk of the game that is all you can do: jump and move, once and a while climbing the occasional ladder or two. It isn’t until a few minutes in when the core mechanic of Fez takes over: the 2D/3D perspective change. 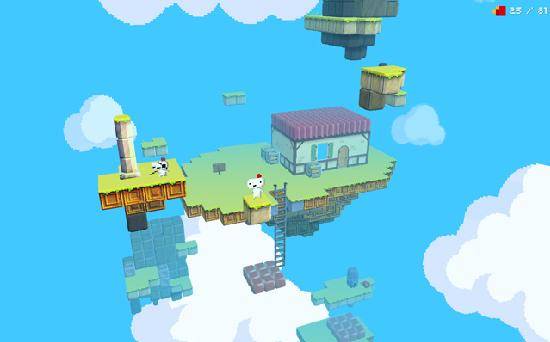 There are four 2D “points” that you can rotate the world around. By hitting the right and left triggers, the cute and colorful 2D perspective will transition momentarily to a 3D one, eventually “locking” in on a new point, therefore changing the entire level around you.

This is what separates Fez from the likes of Super Paper Mario and Crush. In those games, you can actually travel in the 3D space. In Fez, the 3D is only a catalyst to restructure the level from another 2D “point.”

To better explain what I am talking about, here is a (rather poor) analogy: Imagine standing in front of numerous stacks of bricks, all different heights. From this first perspective — let’s call it “North” — you would see the brick towers at different depths and heights. If God then hit the right trigger on his universal Xbox 360 controller, you would then rotate around to position “West,” as the bricks stayed exactly as they are. Doing this would not change the bricks themselves, but your perspective on the towers would be completely different, some maybe even coming in and out of view.

This is exactly what Fez is like. Having trouble making a jump to a faraway platform? By rotating the perspective, you can open new paths and doors you never even knew existed in the current 2D space.

Luckily, while this sounds way too complicated for its own good, it all controls like a dream. Rotating the perspective couldn’t be easier and it only took me a few minutes until I was bounding off a springboard, revolving the world around me in midair, and landing safely on a distant platform. The entire experience is surprisingly intuitive for something so original.

Fez is easily the best game I have played at GDC so far and I can’t wait to see what fiendish and creative puzzles the designers are going to come up with for the final version. I hope and pray that this comes to XBLA one day so millions of people around the world can experience it in all of its amazing glory. Gears of War 2 and Street Fighter IV are great, but the indie games here at GDC are kicking some serious locust and Dhalsim ass, respectively.