Last week at GDC, as a large handful of the Dtoid crew was crammed into an amazing Capcom hotel room playing the incredible Street Fighter IV, I was fawning over a playable version of Bionic Commando: Rearmed that was off to the side, going almost completely unnoticed (sad face).

When this high-definition, XBLA remake of the original Bionic Commando was revealed last month I think I started crying a little bit. The NES classic is one of my favorite games of all time and it was hard for me to believe that they were not only re-releasing it, but doing so with new gorgeous graphics and added features.

But how did it play? Was it everything I had hoped it would be? Were the retro tears of happiness that cascaded down my cheek early this year worth it? Hit the jump for my hands-on impressions of the meaty demo.

That is the initial reaction I had after playing through the first few levels of Bionic Commando: Rearmed. And, sadly, even after having almost a week to contemplate that underwhelming reaction, I still can’t decide what it really means.

Let me break it down for you all so you can try to understand where I am coming from. 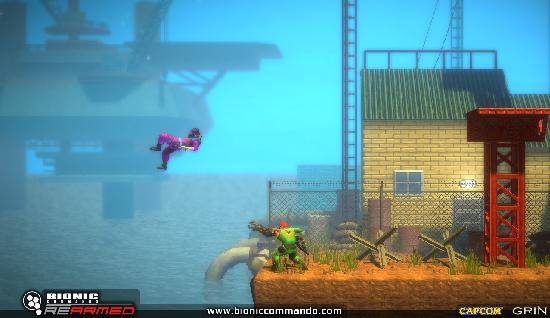 The first thing I noticed (and rightfully so) about playing Bionic Commando: Rearmed was the control scheme. Even back in the day the controls were very odd, and this awkwardness seems to have multiplied over the years.

If you remember the original, your main character cannot jump. At all. Instead, you have to utilize a grappling hook to get around everywhere. Yes, this is the appeal of the game, but the years have not been kind to this admittedly interesting mechanic.

I still can’t put my finger on it, but I think it has a lot to do with how this new version controls with the Xbox 360 controller. Using the analog stick in conjuncture with the rounded buttons makes shooting an accurate grappling shot way too hard for its own good. What can I say, I miss the D-pad and two button setup of yore. 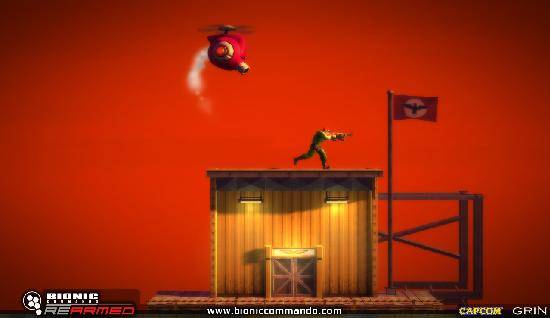 There were many situations where my character would be standing in front of a simple oil drum. Since I couldn’t jump, all I needed to do was shoot my grappling hook at a 45 degree angle and swing over to the other side. It should have been simple as that. For some reason, I had trouble performing this mindless act. My character would shoot the grappling hook, swing, and then, instead of falling off nice and easy, would launch way too far forward, most of the time resulting in instant bottomless pit death. And Bionic Commando: Rearmed is one of those games that doesn’t let you turn in midair (think Ghosts n’ Goblins). Once you jump, you just have to hope for the best.

To remedy this issue, I would then try to just stay attached to the surface I was swinging on and press up on the analog stick to just raise myself to the platform above. Just like before, this action would most of the time result in my character putting away his grappling hook or basically just not doing what I wanted at all.

I don’t remember any of these issues with the original, so I popped in the NES game the minute I got back from . Lo and behold, I had no trouble controlling the game at all, proving my point that something was lost in the game’s pretty transition to XBLA.

A lot of this may have to do with the subtle (but affecting) change in level design. Where in the original game everything felt very full, Bionic Commando: Rearmed feels almost barren at times.

Watch these two videos for an example of what I am talking about:

You see, in the original, the sprites are bigger and there always seems to be something to grapple, no matter where your character is. The new look of the original uses a pulled back view, resulting in larger worlds, but less stuff to do and, in turn, less stuff to grapple. I think this is the reason I died way more than I should have when playing the demo. Instead of the nonstop grapple combinations of the original, launching yourself forward (the best part about the game) is too unreliable when there is usually nothing to grab onto. 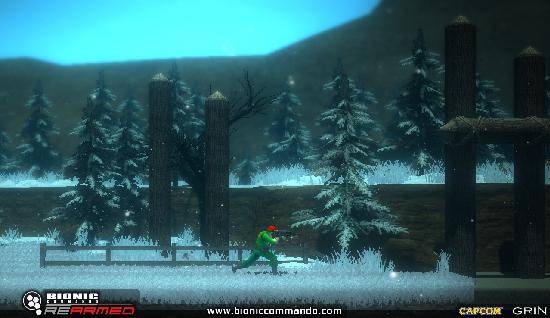 The game is not all bad by any means, though. There are actually some added, exciting features that have the potential to make Bionic Commando: Rearmed a more complete version that the original.

While the story is almost unchanged, some new characters and levels are going to be added to this remake. Most significantly, the addition of these characters results in one of the greatest things ever: co-op mode!

While Bionic Commando for the NES is only one player, Rearmed ups the ante by offering a full two-player co-op mode. Even cooler, the game was designed with this mode in mind. Instead of playing through the same game with one or two people, significant things will change depending on how many people decide to take on the adventure.

For example, Bionic Commando: Rearmed now has bosses the player can challenge. While this is cool unto itself, the designers have taken everything one step further by changing the way you fight these monstrous enemies when playing with two players. At one point in the demo, I was fighting a giant, flying robotic menace. One of the producers of the game picked up the other Xbox 360 controller and started playing with me. Instead of the boss being the same, we now actually had to work together to defeat it. While he stood above it, distracting its gunfire, I had to run beneath it and throw an explosive barrel at its belly. Without my partner’s help, there would have been no way to defeat the boss, adding a huge level of challenge and teamwork.

When asked if this was going to be a common occurrence through the game, the producer smiled and said “You have no idea.” *squee*

In addition to co-op, there is another mode that I almost had more fun playing than the normal adventure. These “VR Missions” (name borrowed from Metal Gear Solid as that is the best way I can describe them) are optional levels that challenge your character to make it to the goal in a certain amount of time. Based on how fast and accurate you accomplish this, you are awarded between 1 and 5 stars. Obviously, the more stars you receive, the more things you unlock in the game.

These levels literally look exactly like the virtual reality missions from Metal Gear Solid (hence my comparison) and almost entirely revolve around some ridiculously complex grappling hook puzzles. From having to swing across a giant gap of spikes to trying to figure out a way to open a locked door, each mission offers a clever and increasingly difficult way to utilize your grappling hook to reach the goal. The mode is hopelessly addictive and an amazing addition to the game. 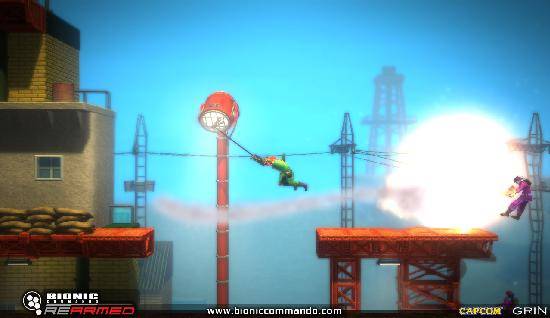 in all, I liked Bionic Commando: Rearmed, but was a little perplexed about the controls. Where as the grappling hook was the greatest part of the original game, in the remake it feels hard to use and almost cumbersome to the gameplay. If Bionic Commando could be compared to something like Contra once you took the grappling hook away that would be one thing, but the shooting and fighting sequences are so bland that you kind of have to rely on the grappling sequences to ensure the game will be something special. It is still in the early stages, so hopefully the grappling control will be tightened up before Rearmed is released later this year on XBLA.

Since I worship the Bionic Commando universe I am going to download this game no matter what, but for now I remain cautiously optimistic.