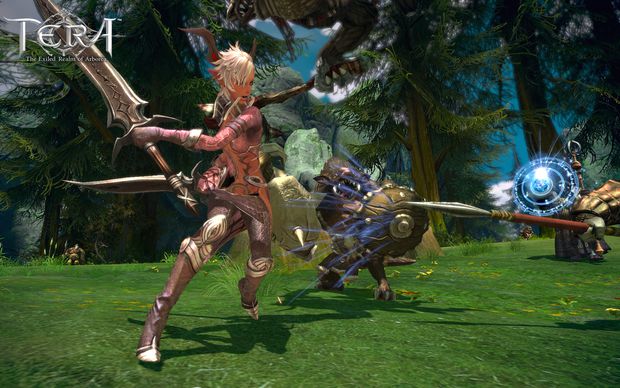 No, not Tera Patrick, you dirty minds! Tera is the upcoming MMO from Bluehole Studios, published by En Masse Entertainment. Yeah, another MMO — do they ever stop pumping these out? To be honest, when I first saw the trailer for Tera a week or two ago, I thought exactly that.

But after playing an instance with two developers from En Masse today, I was pleasantly surprised to find myself having a lot of fun.

So, the first question that will pop in your head is: “There are a ton of MMOs out there and maybe I play World of Warcraft or Guild Wars already. Why the hell should I care?” That’s actually the easy part to answer. Tera is an action-based MMO where you don’t hold the right mouse button to rotate the camera, or left click on a player and press the 5 button to heal while you are just standing around at a distance, over and over again. When I first started playing it, rotating the camera with the right mouse button was the very first thing I tried. But it did nothing!

Next up was moving the mouse around without holding down any mouse button, so I could mouse-over my skills and see what they did. But that moved the camera! Suddenly it hit me: I was playing a third-person RPG on PC that happened to be an MMO.

Playing as the Sorcerer, the left mouse button had a fireball spell assigned and the right mouse button had a chargeable damage bubble that goes through groups of enemies. Charge it to the highest level and it does a ton of damage. The thing about this control layout is that you actually shoot fireballs and damage bubbles where you are aiming. So I was running around, pausing only to click the hell out of the left mouse button and spam dps. The two developers in my party were a tank and a priest. I tried to play it like World of Warcraft and let the tank gain some agro before nuking the hell out of mobs. It worked well, like you would expect from an MMO these days.

Among the spells I had chosen for my mid-range level Sorcerer was a short-range fire column with a short-radius area of effect that stuns enemies so you can escape to a safe distance if needed; this was assigned to the 1 button. The 2 button could be held for around 10 seconds or so to do a literal shitton of damage in a wide AoE. Some other skills were mapped to the F-keys, but I only needed to hold F1 for 5 seconds to cast a mana regen buff that regenerated a good 40% of my mana over around 20 seconds. I say “around” because I was enjoying nuking mobs too much to count the seconds. The F1 mana regen skill can be used in combat, so you don’t have to sit and drink water for a minute until you can go attack the next two mobs like in WoW.

My play session of about half an hour was following the tank through a typical dungeon instance and trying to kill stuff. Your cursor will indicate when you are in range for attacks to hit. That took a bit to get used to, but once you learned to focus on the cursor instead of clicking a mob and walking in range to press number keys, it felt like second nature quite quickly. Another thing I had to teach myself was to not run around like a madman, because the healer also has to aim at you to heal as well; there is no clicking a player and mashing the number key — remember?

Mowing our way through the dungeon, we got to the first boss level enemy who spawns minions as reinforcement if you take too long. Good thing I had the damage bubble to obliterate the spawns, and the AoE attack, even though I kept forgetting to hold the AoE attack to actually cast it a lot of time. The bosses gave us a nice change of pace and some challenge to create a sense of variety between the enemy encounters throughout the dungeon.

At the end, we got to the dungeon boss who did a 3-hit swipe attack and a jumping attack. It actually jumped over me most of the time; good thing too or I would’ve died horrible, horrible deaths. Even though the Tera guys were not able to take down the final boss throughout the day, that was just because they weren’t playing with Destructoid and probably played with the Hair Palace blog guys.

Our healer died when the boss seemed to be almost down, but a constant stream of nuking by our tank and sorcerer eventually destroyed the boss. We actually went “YEAAAH!.” In fact, the developers were super enthusiastic the entire session. Either they were trained well to act like that, or they really were. I believe it’s the latter because they seemed like down-to-earth guys who just loved their game.

Speaking of downing, the boss didn’t have a health indicator, which raised an interesting point. The user testing for Tera showed that the testers are actually split between preferring having no HP indicator for bosses and really wanting one. Not having one means you are a bit more on edge in surviving and finishing the boss without knowing how far you got. Having one might help when you are going to do multiple runs of a really hard instance in the endgame, especially if you keep dying there. We’ll see how it ends up in the final game or subsequent updates after community outcry.

Besides the dungeon playthrough, the developers talked a bit about what makes Tera special other than the action focus. You can play the game with a controller which actually works well because of the camera control and skill layout. The basic layout on the PC is a 2 x 7 or 8 grid for spells in the bottom right corner, and an HP and MP bar across the top of the screen. You can map whatever you want to an Xbox 360 controller, for instance, if you want to play Tera on your TV from the couch. Admittedly, that might sound like crap if you are a hardcore PC gamer.

At GDC Europe, the Tera guys let people play the game with mouse and keyboard as well as with a controller, and actually, most people didn’t really feel any difference in the gameplay experience. Apparently there were some “hardcore PC people” who were “meh” about it. But if anything, you just have the choice to play behind your monitor with mouse and keyboard, behind your desk with a controller or just lying on a couch. You’ll probably still want to go back to your keyboard for in-game chat, but most of us that play MMOs have headsets anyway for combat coordination.

I asked them what the endgame will be like. It’s going to be high level instances like you are used to, but another aspect that is unique to Tera will play a large part as well. Tera will have a political system where they allow the community to elect people like guild leaders to positions of power within the world of Tera. The elected “officials” will have abilities like setting tax rates and some other unannounced things.

This also adds a social aspect and allows those players who want to increase their ePenis by being elected and staying in power to do so. It sounded like an interesting system to keep the community engaged, something that is very important to the Tera developers. Maybe they should become a part of the Destructoid family if they like community that much, don’t you think?

A last aspect about the elected officials political system I should talk about is that they end up in one of two major groups. Since there aren’t really any factions like Alliance or Horde in Tera — because the story is about different races teaming up against a common enemy that threatens the world they inhabit — it’s likely that a lot of PvP will focus around rivalry between these two groups.

Some short, final bits of info:

Tera is not your average MMO. It focuses on action-based gameplay rather than clicking and standing and mashing your queue of number-key skills. Skill at controlling your character and landing your attacks plays a key role in the gameplay. That also means you need a team that is not only good at coordinating and following their assigned roles, but also good at controls and doing the right attacks at the right moments and actually landing hits.

Tera turned me from “meh MMO” into someone who really enjoyed playing it. Being the compulsive gamer I am, I still need to stay the hell away from anything in the genre. But if I had the spare time, I would totally give Tera a shot.