It should be no secret to the more observant amongst you that the current debacle surrounding Manhunt 2 has hit a nerve with myself and Jim. It’s not that we feel particularly protective of the game itself, or of Rockstar as a developer. What we have a serious issue with is the principle at stake here. Like many of you, we adamantly feel that such an action against any piece of media is an action against civil liberty and freedom of choice, and with your help, we want to try use our position as games journalists to do something about it. I’ve included a synopsis of the situation below for clarification, but if you already feel clued up enough on all the issues present here, feel free to hit the jump.

Despite supposedly having a “games ratings system in the UK that is effective”, a piece of entertainment designed purely for the adult market, and never pretending to be anything but, has been effectively banned, thus deeming the adult British gaming public unfit to handle it. The BBFC has stated that releasing the game “would involve a range of unjustifiable harm risks, to both adults and minors” and that even if released only to adults, the title would be “unacceptable to the public”. The game’s “bleakness and callousness of tone” was cited as part of the reason.

While of course I’d love to be able to tell you how accurate that appraisal is, obviously I can’t, as I’m not being trusted as an adult to engage my critical faculties and make up my own mind about what I like and don’t like. Apparently the BBFC already knows what would be “unacceptable” to me. And all of this from an organisation which regularly passes bleak and callous movies with few or no cuts, and accepted in one of its own reports that violent games do not have a negative effect on the player. So what’s the problem?

Well every new medium and cultural movement has teething troubles, that’s something that we’ve seen countless times. From Elvis, to hippies, to home video, to games, the new has always been treated with suspicion and judged more harshly that pre-existing media until it becomes naturalized within the culture of the time, and it seems that that’s exactly what what’s happening here. While vacuous “torture porn” like the Saw series and Hostel is consistently released with no problems, despite offering merely tenous narratives to justify its content, gaming gets hammered by a hysterical and sensationalized press and is forced to suffer all manner of ridiculous accusations and slurs. Of course violent games should be rated accordingly, and those ratings should be enforced, but a ban is an infringement on liberty which other media are unlikely to have suffered. And if this course of action becomes a precedent, as a society we’re on a very slippery slope indeed. But are we just going to sit around and complain to ourselves? No we are not.

So to this end, we’ve decided that we want to act, and we want you guys to help us. A large part of the problem as we see it is that the pro-gaming side of the argument rarely ever gets voiced adequately within the mainstream press and media. Of course, educated gaming publications rail against situations like this all the time, but being specialised gaming publications, we’re unfortuantely, by and large, preaching to the converted. Despite a brilliant sense of cameraderie within the gaming community, we are rarely seen as a unified voice during periods such as this, and therin lies our problem in getting these issues explored fully and openly.

So we want to find a way of pulling everyone together in order to make our perspective known. Currently the idea is very much in the early planning stages, but we’ve already been happily stunned by the level of support you’ve given us. Ideally what we want to create is some sort of organised campaign in order make our concerns known once and for all, which all being well, we hope to culminate in some manner of large scale event in order to bring everyone together under a shared goal. Exactly what this will be, we are as yet undecided, but we know we want it to be big, fun and attention-grabbing, but with a serious message at its core. After much discussion with the community, we’ve decided to call the enterprise “Gamers For Gaming”. We feel this sums up the idea behindthe campaign perfectly, evoking the simple enjoyment of gaming we all want, without any unnecessary complications.

There’s an incredible amount of good in games and the gaming community. They’re not only fun, but at their best can be stimulating, thought provoking, and dare I say it, amazing pieces of interactive art. They bring people together, incite debate on all manner of topics, bring about friendships, and forge communities. I feel I’m right in stating that everyone involved in this site, from community to staff, has felt the many positive effects of gaming at various points in their lives, but has also been unfortunately aware of the negativity to which the medium can be unfairly subjected. 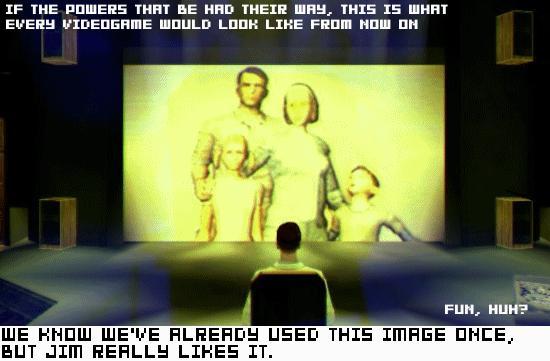 Well we think it’s gone on for too long. Of course new forms of entertainment and art are initially questioned. We can understand that. But gaming has been around long enough for that attitude to be unnecessary now. Millions upon millions of men, women and children play together globally these days, and its about time we moved beyond outdated and overly cautious perceptions of a medium which has brought so much good into the world. It’s about time gaming was truly seen on an equal footing with the rest of the entertainment industry. Things have come on leaps and bounds over the last few years, and gaming really is in the best position it’s ever been in as a mass-media phenomenon, with many of us believing that the teething-troubles were over until recently. Apparently that’s not quite the case though, as while bans of boundary-pushing material are happening, there’s still work to be done in making our pastime a fully matured and legitimized entertainment medium.

So we want your help and suggestions in making something happen. As I’ve previously said, the support we’ve had from you has already been overwhelming, and it’s things like this that make you the incredible community you are. We say it a lot, but it’s absolutely true. You guys are fantastic. We want your ideas, we want your suggestions, and we want all of you involved. We feel it’s time to give something back to the medium that we’ve all gained so much from, and we know you lot are exactly the sort of people to help in doing that. Like I said, at the moment we’re at a very early stage, but from this point on, Jim and I will be contacting as many people as we can in all areas of the industry to see if this thing has got legs, and we’re going to give it our every effort to make it happen. Start getting in touch with us as soon as you can. We’d love to hear from every one of you.

And in the meantime, do what you can on your own. It’s tricky, but there are things you can do. The BBFC is a non-governmental body, but feel free to contact your MPs with your feelings on this matter. You can find a full list of them here. These things get raised to the government from a negative perspective, so why not ours? ELSPA also exists as a guardian of the British games industry, so make sure they know you’re unhappy with their inaction. Arm yourself with the information you need and hit them with well-considered, non-inflammatory expressions of your feelings, and hopefully they might pay attention. And while it’s a long-shot, the same might go for the BBFC themselves. It’s definitely worth a trip to their site regardless, if only to read up on their regulations, ruling, and their previous reports on gaming, particularly the one I cited above, which can be found here.

Let’s get on this now, and let’s get some serious momentum happening. Apathy and acceptance of these things is the only way they can continue, but conversely, making a stand and making your voice heard can and does make all the difference. Let’s make that difference.