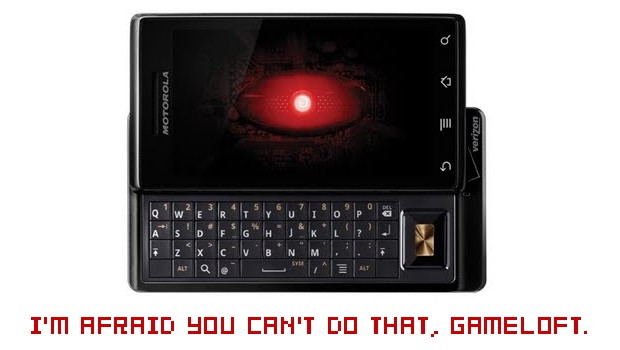 Here’s some news that should make Apple fanboys happy: Gameloft says that it will be scaling back its investment in games for the Android platform, and that other development companies are doing so as well. The French game developer, who makes most its money off of mobile games, says that many other companies are following suit thanks to Google’s lack of promotion of the games on their platform and the service not being as well put together as the iPhone’s.

This was all revealed at a recent shareholders meeting in which Gameloft finance director Alexandre de Rochefort said, “We have significantly cut our investment in Android platform, just like… many others.” He then went on to state that Android’s app store is “not as neatly done as on the iPhone.” Following that statement up by slamming Google themselves for a lack of support: “Google has not been very good to entice customers to actually buy products. On Android nobody is making significant revenue.”

I’ve seen that new Droid phone and played around with it a bit, and I must admit he is correct about the service not being as neatly done, but the phone is just out of the gate and there are a ton of other models that use Android set to hit. I doubt it will hurt Gameloft too much since they are still developing for Android, but they might be kicking themselves over this decision in a few months time.