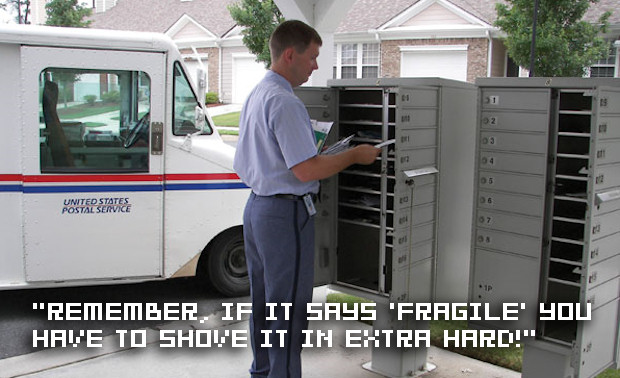 Ah, the USPS. I can only speak for my local branch of this lovely organization, but if the rest of the United States Postal Service is anything like my lot, then it is made up primarily of lazy, incompetent imbeciles. Apparently, GameFly feels the same way, having lodged a formal complaint over the high number of damaged goods and the preferential treatment apparently given to competitors.

According to the videogame rental service, the USPS “adopted a practice of manually culling out the DVD mailers of two high-volume shippers of DVDs, Netflix and Blockbuster, for special processing.” Gamefly alleges that it was denied similar preferential treatment when requested.

GameFly also asserts that in-transit breakages are still happening despite efforts on the company’s part to use cardboard protectors and “tests with larger mailers.” The breakage rate is at 1%, which doesn’t sound very high but is apparently a big deal to the rental service. It’s not just damage that’s irked GameFly, however, as the complaint also focuses on outright theft by USPS employees. The USPS has already seen the arrest of 19 employees due to hands in the cookie jar.