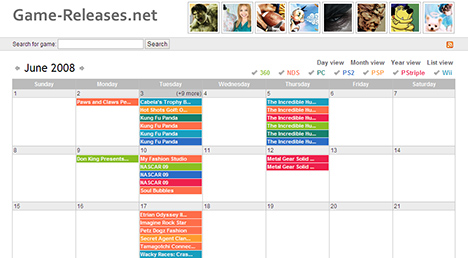 The Destructoid community is an amazing agglomeration of people from all walks of life. There are too many talented individuals to name; we’ve got artists, writers, scientists, photographers, professionals, academics, and, of course, gamers. But since gamers and geeks are usually intertwined, there’s also a fair amount of computer/programming wizards here. One of them is Pedro Blandino, a fellow New York City Dtoider who decided that he’d provide the gaming community with a service it sorely lacked.

Currently, gamers looking for release dates have to peruse uninspired lists that present the data in a no-frills, boring, and unappealing manner. So Pedro figured out a way to display videogame release dates in an intuitive and visually attractive way. He has created a Web site, Game-Releases.net, which shows release dates in a virtual calendar (see header image above). Game Releases supports any current gaming platform you could want: “PStriple”, 360, Wii, PS2, PSP, DS, and PC.

The sleek iCal-inspired interface utilizes AJAX programming (à la Google Apps) to allow you to change how you’re viewing the calendar on the fly. By default, it shows all games on all platforms — so for example, if you want to just see PS3 games, click all the other platforms and you’ll eventually be left with PS3 games. The platforms are color-coded, and game titles appear in the calendar with their platforms’ respective color schemes. The site will remember your settings, too.

If it were just that cool monthly list, the site would be great enough. But it goes well above and beyond that, providing a full game database with basic data for every game (release date, platform, description, ESRB rating, box art, etc.) as well as a number of different ways to view the games (monthly/yearly calendar, daily/monthly list). I talked with Pedro; he told me that the idea came to him around six weeks ago, and he’s been working on the site for about a month now. He did a visual draft in Photoshop, and a friend, Arche, did most of the coding. Another awesome Dtoider, riomccarthy, helped Pedro out with a list of dates.

The site’s still in beta form, but it looks great to me. Head on over to Pedro’s community blog for more information. I think this is a fantastic idea that could really take off, and my fellow editors agree. What do you guys think?