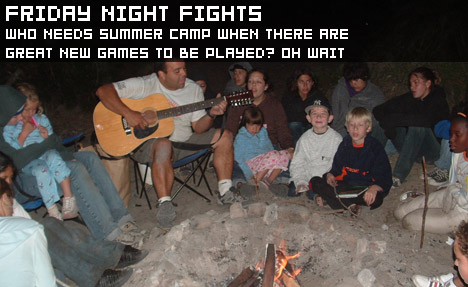 If only good games could be released throughout the entire year, rather than being bunched together during the November/December rush to get stuff out the door in time for Christmas.

For starters, we wouldn’t have to skip out on certain games in place for others as a result of a tight budget, and we’d also have something new to play during the dreaded summer period that’s home to shovelware and movie tie-ins.

Seeing as how that’s probably never going to happen, it looks like we’re stuck with the same old, same old for Friday Night Fights. Hit the jump for the host listings.

Mini-guide for meeting up with Dtoiders for Super Smash Bros. Brawl or Mario Kart Wii:

The IRC way: head on over to this Web site (or start up your own IRC client) and type “/join #dtoid-brawl” without the quotation marks.

The Ventrilo way: download and install Vent. Then use the following info to log onto Dtoid’s server:

The 360 way: use your Xbox 360 to chat with people on your friends list. Steam or IM will work fine too.

The following hosts are European, and may or may not still be hosting by the time you read this: