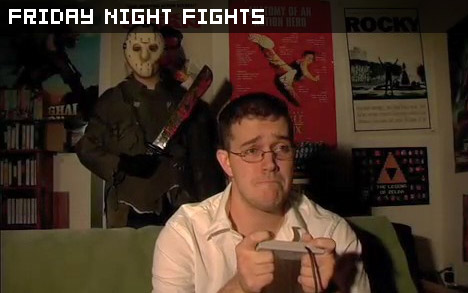 Spooky, isn’t it? Actually, no, it is not. I haven’t had anything unusual happen to me today, but I suppose that’s actually a good thing, boring as it may be.

Now that I got that semi-unrelated anecdote out of the way, here’s some actual content: retro gamers can now join in the fun with the rest of us, as this week’s Friday Night Fights includes the original Castlevania as a part of Cowzilla3’s excellent Educate Yourself series.

Besides that, everything else is pretty much the same old story, although we could use some more Xbox 360 hosts. Hit the comments if you’re up to the task!

Mini-guide for meeting up with Dtoiders for Super Smash Bros. Brawl or Mario Kart Wii:

The IRC way: head on over to this Web site (or start up your own IRC client) and type “/join #dtoid-brawl” without the quotation marks.

The Ventrilo way: download and install Vent. Then use the following info to log onto Dtoid’s server:

The 360 way: use your Xbox 360 to chat with people on your friends list. Steam or IM will work fine too.

New section is new! Basically, anything that doesn’t quite fit into the aforementioned categories will find a new home in this space.

First up, there’s some retro goodness with Educate Yourself’s FNF @ 10:00 EST. This month’s game is the original Castlevania, so hop on on our IRC room tonight and chat it up, vampire style.

Seeing as how Euro FNF normally starts winding down as this post goes up, I can’t really list the European hosts with the U.S. hosts above without knowing for sure that they’ll be staying up late to play with the American FNF crew.