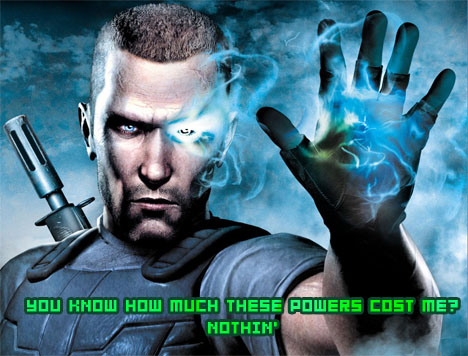 So I heard you like free games? I know I sure do, which is why I’ve already started downloading Midway’s Psi-Ops: The Mindgate Conspiracy. Sure, it has a weird subtitle, and I don’t really know anything about it…but it’s free!

The short description says it features psychic powers, guns, and violence. Sounds good to me! It also got an 84/100 on Metacritic, so at least there’s a good chance it isn’t terrible. Even if it was, though, it would still be free, making it slightly less terrible by association. Just like some of the free samples you munch down at the supermarket but wouldn’t touch otherwise.

You’ll need to sign up for a FilePlanet account, if you don’t already have one, to download it. That’s a pretty minor inconvenience, though, seeing as it leads to getting a free game. Oh yeah, and there’ll also be ads. If you find ads to be really bothersome you could always buy it for $14.95, but then it wouldn’t be free, thereby completely defeating the purpose of me telling you about it in the first place.