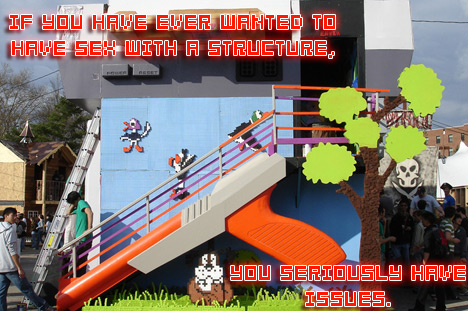 Matthew, of The Tanooki, sent us an e-mail a few moments ago linking to the pictures above and in the gallery below. He didn’t have a ton of information, but after careful study, I have come to the following conclusions regarding this magnificent piece:

Point 1: The house was created by a fraternity (specifically, a chapter of Sigma Phi Epsilon), more than not likely as a fund raiser of some sort.

Point 3: The young men who created this have either never seen a woman nude, or have sex so often that their exploits are only whispered about around campfires and in public bathhouses, so as not to enflame the women-folk.

On a more serious note, I want you all to put down your Bibles and focus on something important; the detail and thought that went into the creation of this funhouse is utterly redonk! I dare you to say that that Zapper recreation isn’t totally spot on, or that the pixel art of that bastard dog from Duck Hunt isn’t truly stunning.

If the guys from Sig Ep happen to be reading this (or you happen to know them), have them write in and explain what went into this masterpiece. The Robot MUST know!

[UPDATE: After a bit of snooping, we’ve found out that the gentlemen responsible for this whole thing are the Carnegie Mellon University chapter of Sigma Phi Epsilon.]

[UPDATE #2: During the day, I received over three e-mails offering more information about this pixellated abode. As I said before, it’s the work of the Carnegie Mellon chapter of Sigma Phi Epsilon, and it was a booth put together to raise money for charity during their Spring Carnival. I’ve added more pictures to the gallery, and you can find a webcam here. Last year, these guys had a Star Wars-themed booth, and we’re hoping that next year, they approve of my suggestion to create a Civil War reenactment-themed booth completely out of LEGOs.

Thanks to Daniel and Bryan for writing in with more info (and for being part of that awesome frat), and to George for taking these pictures in the first place.]