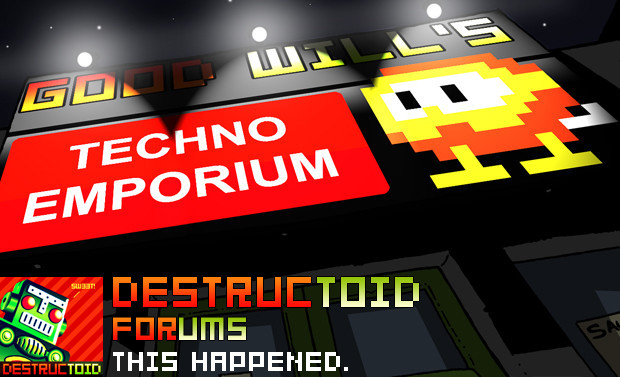 The countdown to PAX begins!  It’s about one month until Destructoid descends on PAX once again and it should be one hell of a good time. PAX is a big deal for Destructoid and a lot of people are excited,  but that is the future.  We are here to talk about the past, specifically what happened last month in the forums.

Besides the discussion that takes place every day in The Bar and Pictures thread, last month we had a posting guide, some new badges, a push to get some discussion going in the gaming section and also set some new records.

So let’s talk about what happened in the last month on the Forums as we do our last pre-PAX recap.
The jump, you must follow me to it! Firstly, let’s get the boring stuff out of the way. We hit yet another record for people online at the same time: 349. Our new registrations for the month has stayed at a steady 200 and new posts has stayed at a consistent 16, 000. So that’s all well and good.

I also updated the badges to spotlight more of the community podcasts on our fine site. We have a Backwards Compatibility badges, Refused Classification badges and a Drunkcast badges. In addition to those we have the much asked for Friday Night Fight badge for hosting 3 FNF’s, a “Good Trader” badge for making good trades in our trading forums and finally, we have the triple A team badge, which is a Atheistium (of Podcastle fame) fan club. In addition to all that, I updated the three-year anniversary badge with some new art to replace the terrible cupcake too.

Some of you might have noticed that Mikey did a comic as well. Some goofball is in it, not sure who he’s supposed to be but he looks like a dork.

My biggest initiative this last couple months has been to teach new Forum goers how the Forum is organized and promote some serious discussion in the gaming discussion Forum. To help with that first part I wrote up a Destructoid Forums posting guide. I’m hoping that guide will help new Forum users figure out where they should put that post they are writing. I’ve been trying to avoid having redundant threads and topics in the Forums. There is nothing worse to me then Forums with dozens of threads all on the same subjects, especially in the gaming discussion and bar Forums.

On the topic of serious discussion, Aerox (lovable editor Jonathan Ross) has started the Dtoid Forum discusses series in the gaming discussion Forum. He’s been doing a couple of these a week on such topics as achievements, games journalism and mature games. They have been pretty popular so far and I encourage everyone to chime in on them if you have something to say on the topic. Additionally, this series is not limited to just Jonathan. If you have a topic for Dtoid discusses go right ahead and start up a thread for it. In addition to this, Digtastik has started the weekly Dtoid news discussion thread. This is a single thread in the bar that covers many “non-gaming” news topics to discuss. I would also encourage you to participate in this thread. He updates the topic as the thread goes so you can check the most recent page to find out the topic.

I want to give a shout out to Shakey1245, Phallus Knife Fight and Grievetrain for their awesome shops and art that keep making it into the Podcast posts. Aerox and Digtastik for helping to bring discussion back to the forums. Hamza for coming back to the forums regularly and sparking up activity with his shenanigans. Finally a shout out to Niero for being the best boss ever. I’ll try to not bring the Forum down around your ears.

As always, if you lurk, sign up and post. If you’ve never been, come check us out. If you post all the time, then keep it up! My private messages are always open and you can send me anything from questions, new banners or just bounce some ideas off me. Don’t be shy!

See you guys next month and then PAX!