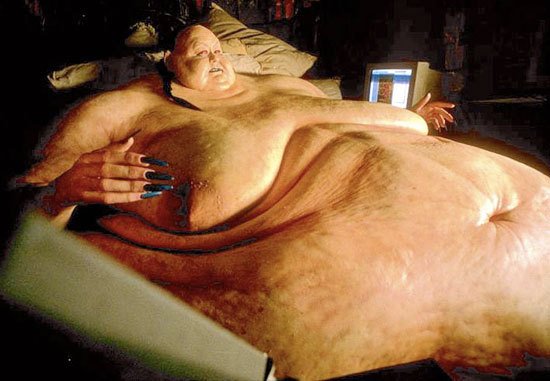 As part of our rigorous contract negotiations, Eliza and I made an unorthodox proviso: on our first day at Destructoid HQ — a gigantic robot head perched atop a volcano — we expected to be introduced to our fellow editors with the scrotum-glowing glory of Electric Six. Seated upon burnished thrones in an opulent Edwardian parlor, the staff — one by one — would be ushered in, to quake in our bizarre and profane presence.

We were pretty excited about the idea. If you want to establish a cult of personality, it is best to go all out. Unfortunately, Eliza overslept this morning, and anyways, I had hurt myself the night before when I made the mistake of shoving a white-hot lightbulb underneath my taint as a way of rehearsing the routine. My back-up plan to achieve the effect — drinking several liters of radioactive isotopes, then holding my bladder until it was filled — only left me with several sentient cysts. Our props failing us, Eliza and I decided to make our first day at the office “no big deal.”

But God bless Destructoid’s editorial bullpen. As I shambled into the office this morning, they were all there. Aaron Linde! Dale North! Gameboi! Fronz! Colette! Jim Sterling! Tiffany Chow! And the rest! And when I walked through the robot’s mouth and into the bright, light-filled atrium of Destructoid HQ, my new brothers and sisters let out a cheer and advanced upon me, their hands raised for a communal high-five, with Orcist at the head of the pack. My eyes swelled with grateful tears; I wished Eliza was there. Surely, this was heaven.

Unfortunately, it sort of fell apart from there, as it quickly became apparent that the Destructoid staff was as unschooled in the art of the high-five as I was myself. If you’ve ever seen Saved by the Bell, you’ll know what happened next: as I propelled my arm forward to high-five Orcist, my hand missed his by a good 6 inches, and I felt the sickening sensation of nose cartilage crunching beneath the heel of my palm.

As Tiffany Chow stuffed big wads of Kleenex up Orcist’s nose to stop the bleeding, the other editors gave me contemptuous looks and retreated back to their cubicles, barely glancing over their shoulders as I performed an impromptu routine of breakdancing moves as a way to win back their hearts and minds. Things were not going as I’d hoped.

But someone took pity on me. A man who I had first mistaken to be a hobo came up to me, extending his hand. I took it gladly and, looking into his eyes, realized he wasn’t a hobo at all. He was BuckF1tches, Destructoid’s resident unpaid tipster.

You could tell from Buck’s earnest face that he expected me to be delighted. But his features soon mutated into a thyroidic mask of alarm as I began to twitch from head-to-toe.

Furious, I burst into Niero’s office, but not even the vomit-inducing pageant of grotesqueries I found within could stifle my obscene litany of “Well I nevers!” Imagine the grossest looking humanoid in the world: a golem-like creature of mozzarella and bird droppings, stuffed into a pair of children’s Underoos and with a jellyfish draped over his head. This is Niero. His fetid liquidity and jelly-like skeleton were constrained on each side by the lip of the plastic kiddy pool in which he less sat than congealed. Sitting cross-legged before him, two beautiful, nut-brown Filipino boys. Each held a moist GameCube controller that umbilically stretched from Niero’s toilet-sized navel. As they mashed buttons and swirled thumbsticks counter-clockwise, Niero emitted gurgles of pleasure and I knew I was witnessing something profane. But I was a crackerjack businessman: this was a time for negotiations, not gastric upheaval.

“Bitches leave,” I snarled at the Filipino boys, doing my best Clarence Boddicker impression. Without a word, they stood up, adjusted their mustard-colored loin cloths and left the room. Niero looked annoyed for a moment, but then he saw it was me. His face lit up in pleasure.

“Florian!” he said. His voice was the sound of a thousand happy farts. “Welcome to Destr…”

I cut him off: ” You haven’t been straight with me.”

He looked confused. “What do you mean?”

“When I took this gig, no one told me that I was going to be expected to be a journalist…” I complained. And I briefly recounted my conversation with the hobo in the atrium.

As I explained the chain of logic that had brought me to the conclusion that some sort of journalism would be expected of me, I got more and more upset, until by the end of my long, stream-of-conscious run-on-sentence, I was in the hysterical throes of a panic attack. It was then that Niero — an expert editor and a leader of men — slapped me. It was like having a pail of cottage cheese thrown in my face, but it calmed me down.

“Look, Florian,” Niero said comfortingly. “There’s no point in getting upset. Just do what it is that you do best. You’ll be fine. Now, if you’ll excuse me…” And just like that, a sphincter opened on his forehead and a pineal gland extruded like the pink worm of a dog’s erection. It glowed once in a psychic summoning and before I knew what was happening, the Filipino boys re-entered his office and ushered me out the door.

I was not mollified. As I walked to my desk, I passed Colette and Jim Sterling playing Crackdown on the couch. They invited me to join them. But I was in a foul mood. “I don’t like video games,” I told them, and when they laughed, I opened my eyes as wide as they would go, exploding several blood vessels in the process, and began wordlessly screaming. Then, just to make sure they knew I was serious, I evacuated my bladder into my beige parachute pants. The effect was as I intended: they would not make the same mistake again. I was a man with no understanding of irony or sarcasm. Satisfied, I went back to my desk, and that’s when despair kicked in.

“Just do what it is that you do best,” Niero had said. But I had no idea what this meant. What did I do best? I looked back at the timeline of my life: a 28 year expanse of utter mediocrity and fumbling sexual plebianism. I would find no answers there. My tears fell fat and wet upon my lucrative contract. I was a failure. I would be fired.

But just at the moment when my self-loathing was congealed to its thickest, an IM came in, as if by magic. It was from my old Kotaku buddy, Brian “LOL!” Ashcraft.

I immediately clicked the link. And this is what I saw:

If you love the palpable sensation of a room full of human misery, I’m sure you’ve already seen this. In fact, Destructoid has already posted it, but to refresh your memories, here’s a brief synopsis. Resembling a used prophylactic vomited up by a hooker, pulled out of a toilet and then stretched over an unfunny human soul, Jamie Kennedy hosts Activision’s E3 presser, and could not have flopped on stage any harder if he’d been shot in both kneecaps moments after being introduced. Drunk, stupid and insomniac, Kennedy rambles on throughout the show, filling his guests with contempt and eliciting only the nervous laughter of the PR weasel who had made the mistake of hiring him… and has by now been demoted to the role of assistant janitor.

Like many of you, I was in awe of the spectacle. How could any man be so unfunny? I imagined what would have happened if Kennedy’s audience had been filled with pregnant women: in my mind’s eye, I pictured the doors of the conference center buckling outwards, then exploding off their hinges as a tidal wave of amniotic fluid and half-formed fetuses gushed into the hallway, carrying Kennedy as flotsam upon the mewling wake. As I watched the video, even I — a black albino gay Irishman — found myself wishing more than once for a fetus of my own to abort. It was the only way I could be purged of the experience.

But strangely, Kennedy’s video ultimately filled me with hope. In his failure to amuse or entertain, I realized exactly what it was that Niero was talking about, that special quality inherent in myself that made me worthy of writing for Destructoid. And so I want to make you guys a promise. For the months and years to come, in what I hope will be a long dynasty of Destructoid contribution, I will always endeavor to do what it is that I do best: suck less than Jamie Kennedy. Overpaid, unfunny hack that I may be, I could always be so much worse. And, really, isn’t that worth the tens of thousands of dollars Destructoid is paying me, in and of itself?

The future is once again bright. I think I’m going to fit in just fine.