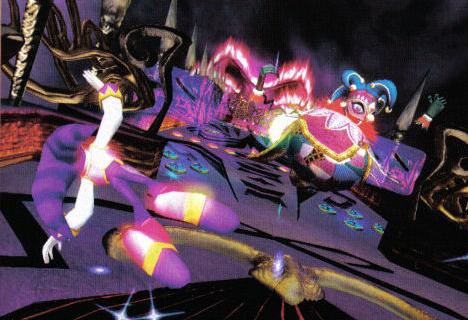 We reported on this highly anticipated Wii exclusive being more or less official earlier this week, but I guess this makes it extra official. Unless this is just some (very) elaborate April Fool’s joke. And if that is the case, touché, Sega, touché.

Portuguese magazine Maxi Comforted has the first images from NiGHTS 2 (tentative title) and they look pretty great. Based on the pics in the article, everything is very reminiscent of the original, which is most definitely not a bad thing. The style in the first NiGHTS was awesome and this Wii iteration looks to be no different. I can’t wait to see the first video of everything in action, as NiGHTS really shines once you see it all in motion.

I don’t speak a lick of Portuguese, but I will attempt to translate what the article says:

Okay, that was a waste. While I go wander the streets looking for someone who can help me out with the translation, take a gander at all the scans in the gallery below.

What do you think? Pretty nice, eh?