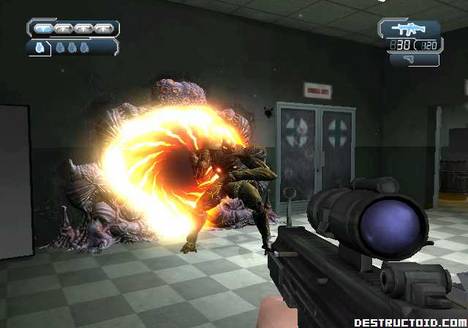 High Voltage Software’s The Conduit is a refreshing title. Not necessarily in what it is — a first-person shooter, a narrative involving a government conspiracy and alien technology — but in how and why it is.

The Conduit is a Wii-exclusive title, built from the ground up to specifically take advantage of the console’s technology. High Voltage Software had one goal in mind: make the best damned Wii game they could, a game that they wanted to play.

“What spurred us on to do a game like this,” High Voltage’s Eric Nofsinger tells me, “[was] when the Wii was first announced, as core gamers ourselves we were really excited by games like [Ubisoft’s] Red Steel and thought ‘Hey, that’s going to be so cool!’ Then we got the game were kind of like ‘Oh, uh, OK.’ “

He admits that Ubisoft’s shooter was “not bad, but not great,” and laments the lack of original first-person shooter ideas on the Wii. Metroid Prime 3? “Cool, but it’s not really a shooter,” he says. Metal of Honor Heroes 2? “Good game, but also a port … from the PSP.”

“It seemed like nobody really wanted to push what the Wii could do,” he says, “and do a really good first-person shooter. So we were like ‘OK, well if no one else is going to do this, we want this game, we want to play this game. We’re gonna make it.'” 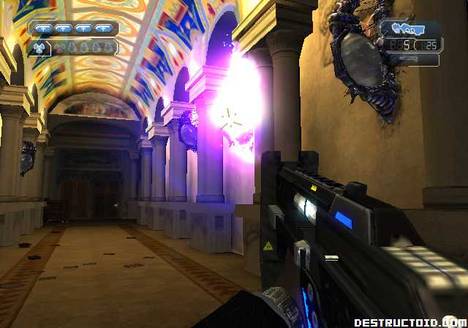 Visually, The Conduit is certainly pushing the graphical capabilities of Nintendo’s console. It doesn’t look as crisp or sharp as anything you’d see on the Xbox 360 or PlayStation 3, but the game — quite surprisingly — holds its own. Nofsinger is excited about their technology, throwing around words like “specular lighting” and other crap gamers probably won’t understand. The bottom line is that he has every right to be proud of what they’re pulling off; next to the other Wii titles on the Nintendo Media Summit floor, the difference is staggering.

“We definitely wanted to make a graphically and technically advanced game,” he tells me, “But that alone wouldn’t be enough, really.”

Control in-hand, the gameplay feels right. You move with the nunchuck analog stick and aim with the Wii remote, swinging the reticule to the edge of the screen to make full turns. The aiming felt responsive, but if it didn’t, I had the option to pull up a detailed menu to tweak that in real time. High Voltage is keen on letting you tailor the controls to your liking, offering a number of different control schemes, even hinting at fully customizable controls in the final build.

During my play session, I had some issues with the setup for weapon switching — it was mapped to the D-pad, and stretching my thumb up and off the “A” button felt awkward. I mentioned this to Nofsinger, suggesting that maybe they include an option to cycle through the weapons by tapping the “Z” button the nunchuck. He’s excited by the feedback and the suggestion, asking me more questions about why I felt it didn’t work. He even grabbed a notebook and took notes, saying that my control suggestions would be easy to implement. 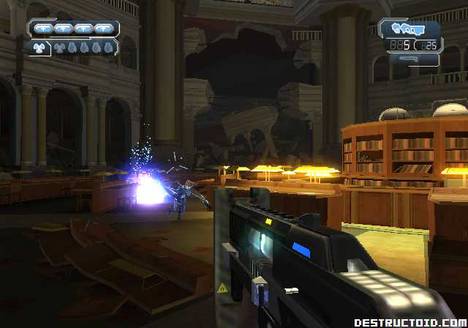 Sad to say it, but after almost two years on the market, The Conduit looks like it’s going to be the first full-featured exclusive first-person shooter for the Wii. Nintendo aren’t blind to this fact, either. According to Nofsinger, Nintendo have been extremely supportive of the title, excited about the possibilities. During day one of the Media Summit, High Voltage was the only third party to present during the early morning media briefing. And perhaps Nintendo’s executive vice president of sales & marketing Cammie Dunaway was just being hopeful when she accidentally called The Conduit a “first-party” game during her own presentation.

“What she meant to say is it’s a ‘first-person’ shooter,” clarifies Nofsinger, “I think Nintendo would be a wonderful partner, but to my knowledge — at least the contracts I’ve seen — are not with Nintendo … we’ve not announced yet, but we’ll be announcing very shortly.”

First-party or not, that hasn’t stopped Nintendo from swinging by High Voltage’s offices to check out The Conduit and give its input. The title will support the upcoming WiiSpeak peripheral for voice chat during the the game’s 16-player online multiplayer matches. And while Friend Codes will be supported, Nofsinger says they’re working closely with Nintendo to explore new ideas in this arena.

“The [Friend Code] system is maybe more flexible than most folks know,” he says. “We think it’s maybe the way it’s presented to players. Short answer, we are exploring that. We’ve got some ideas there. I don’t want to say exactly what some of them are, because we’ll probably be improving those over the next month.” 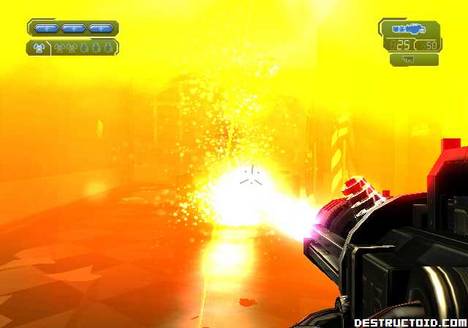 Nofsinger says WiiMotionPlus dev kits are already in the house, and although there won’t be any gameplay specific to the new peripheral, the game will support it.

“We’re not going to have any radical, crazy melee system or anything like that,” “Maybe for the [sequel].”

And there will be sequels, just don’t necessarily expect to see them on other consoles. Nofsinger tells us that The Conduit, as a franchise, will likely always remain on the console that inspired its creation — the Wii.