Since the release of Brutal Legend, the minds over at Double Fine have been hard at work bringing us quirky new adventures and worlds to explore. Their upcoming  XBLA/PSN title, Stacking, has got to be one of the most charming games I have seen in recent memory.

The game takes place in what was described to me as a 1930’s era living diorama, populated by numerous different types of Russian stacking dolls. Each location in the world has a handcrafted feel to it, incorporating numerous miniature objects, such as pins, playing cards, golf balls, and marbles.

Stacking has everything you would expect from a “larger” adventure game, a compelling story, detailed environments, witty dialog, and entertaining cutscenes. Everything is designed to reward the player for exploring and pushing the story along. Where Stacking really shines though, is its blend of fun puzzle solving mechanics utilizing the Russian stacking dolls and their varying abilities. 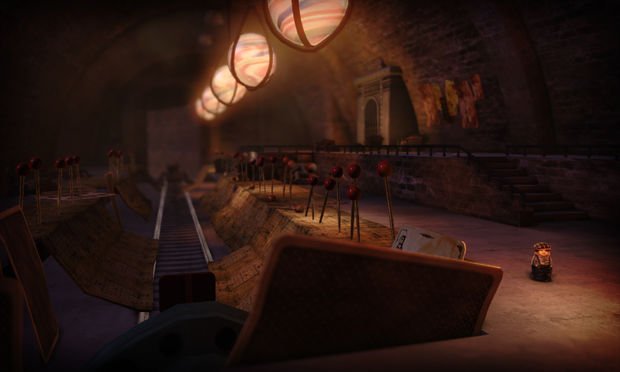 Upon entering the world of Stacking, we are introduced to the story and characters through a silent film style cutscene. We also meet our protagonist, Charlie Blackmore, the smallest of the Russian stacking dolls. After being separated from his family, Charlie is thrust into the world of Stacking and must set out on his quest to reunite with them.

You will start out in the Train Station, serving as both the tutorial level and a hub for moving between levels.  We are also introduced to Charlie’s unique ability to hop into larger dolls. Charlie can stack up in size, taking advantage of the dolls various abilities to progress through the level. There is a sort of synergistic feel to it, as you are free to experiment with different combinations of dolls and the abilities they provide. 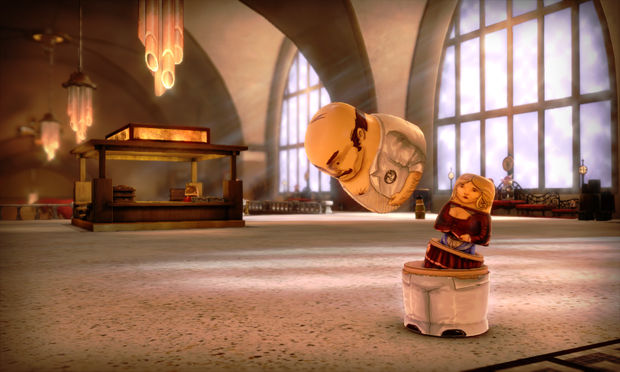 In order to complete any given level, you are presented with a series of challenges and a specific stacking set that you must obtain. In order to complete the challenges, you must utilize the abilities of numerous dolls wandering around the level. One doll may have a key attached to his head, allowing you to unlock an important door. Another doll may have a more “subtle” ability, allowing you to clear out an important room by passing gas into a fan. There is no inventory or micro management of any sort, dolls are the only tools you will need to solve these puzzles.

The look and feel of the game, as well as the overall level design is spectacular. Stacking is running on the Brutal Legend engine, so needless to say the game benefits greatly from leveraging this technology. The amount of sheer effort and attention to detail that has gone into bringing this miniature world to life goes a long way in completely immersing the player in the game. I was thoroughly impressed with the second level of the demo, which takes place on a cruise ship of sorts. The giant cigars used to create the smokestacks on the ship were a neat little touch, not to mention to adorable cardboard cutout animals that are used for the awesome safari style carnival. 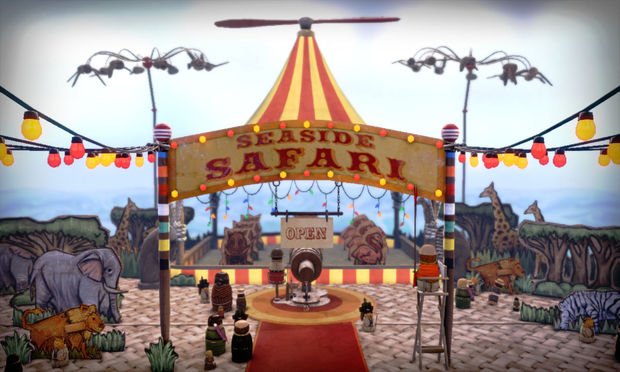 Stacking has an enormous amount of depth, especially for a downloadable game. Double Fine has gone to great lengths to provide an experience that caters to both casual and core gamers equally. Each level contains multiple challenges, all of which can be completed multiple times and in multiple ways. Players can always return to a previously visited area to continue unlocking secrets and completing challenges. There will always be at least three challenges per level and often more than that. There are no real fail conditions to speak of, so Stacking attempts to teach players and keep things interesting and fresh by providing a ton of variety and replayability.

As you progress through the game, all of your progress and unlocks will be tracked. You gain access to a hidden warehouse, which functions as a kind of trophy room. As you complete challenges, your friend Levi (who we meet early on) will construct murals depicting various story moments throughout the game. Each of the hundred plus unique dolls that you collect will be on display in your warehouse as well. For completionists, this should be a fun way to track your progress in Stacking. 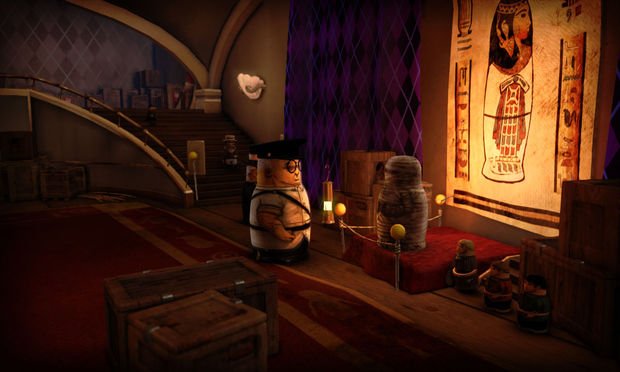