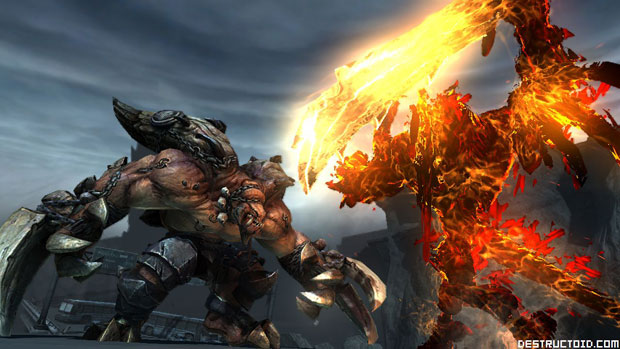 Along with the first in its series of “Hellbook” videos, THQ sent us a mess of information about the weapons and powers that will appear in the upcoming Darksiders.

From what we’re told, War will purchase weapons and upgrades by trading souls to Vulgrim, who will equip the horseman with Wrath powers. They all sound terrifying, too — Affliction, Blade Geyser, Immolation, and Stoneskin. I don’t know what any of that stuff means as far as the game is concerned, but my guess is that anything that steps in the way of War is basically f*cked. Well, at least that’s the plan.

Hit the jump for images of some of the gear that you’ll find in the game, along with fancy blurbs written by THQ.

“Death is not always a cacophony of death cries and armor-beating.  Sometimes it is a muffled tchink…a silent pause…and a sharp point through the heart.  The Abyssal Chain is a supernatural gauntlet forged to deliver such a fate.  It fires a spearhead out of its engraved mouth with blinding speed, unspooling a chain behind it.  This chain can be retracted to drag a dying foe to an even fouler fate.  Or, it can pull the Chain and its master skyward to swing across the wastes.”

“The Voidwalker does what no mere weapon can:  it opens a hole in reality itself.  This arcane artifact seethes with energy, which can be fired through the veil of the universe.   When two such perforations are made, dimensional space curves back upon itself—and the Voidwalker’s holes are connected.   To step into one hole is to exit the other to a new location.   Thus, the Voidwalker’s master can weave his way through the byzantine wastes, to access every bloody nook and corpse-filled cranny.”

“Shadow Flight manifests as ghostly demon wings.  As they emerge and spread, the wings seize upon currents of air.  Those who master Shadow Flight can soar to dizzying heights, there to discover certain artifacts and secrets–some of which are better left forgotten.”

“Even when silent, the Earthcaller appears to be screaming.  Its mouth has been carved to resemble two demon faces twisted with rage.  The horn is a powerful artifact, able to channel fury into raw sonic power, knocking back foes—and breaking spells of slumber.  Far more than a weapon, the Horseman War will surely find use for the Earthcaller.