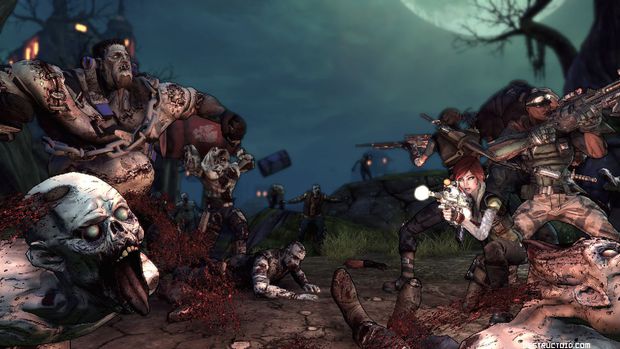 In what’s sure to get everyone up in arms, the first batch of downloadable content that will be made available for Borderlands has been announced… before the game has even hit store shelves.

Planned for release later this year, “The Zombie Island of Dr. Ned” will be available for all platforms for $9.99 (or 800 MS Points). The description from the press release:

Tasked with keeping the workers of Jakobs Cove alive, Dr. Ned (who is not related to Dr. Zed from Fyrestone) does his job a little too well, creating zombies and other abominations that now run rampant in this region. Players will have to work alongside Dr. Ned as they embark on a quest to cure the inhabitants of Jakobs Cove in this full-fledged expansion filled with new enemies, new quests and rare loot drops.

As someone who’s played the game extensively (but can’t say anything about it), this sounds like a good time to me. Zombies? Loot? Abominations?!?! Sign me up. But for those who haven’t played the game, it probably doesn’t mean too much. I mean, do you even know you Dr. Zed from Fyrestone is?

Of course you don’t, because the game comes out next week, on October 20. Now, before you pull out your pitchforks and start waving around the “This is content that should have been included on the disc” or “Free or not for me!” signs, keep a few things in mind…

One, Borderlands — the game that’s shipping to stores — has basically been “in the can” for awhile now. Two, I’m pretty positive that folks are working to complete this DLC right now; they’re probably staying late and missing time with their families and friends (or sleep) so they can meet some kind of deadline. This is after they probably crunched to get the actual disc-based game finished in time for release.

We don’t know how big this additional bit of content is, but like Bethesda‘s post-Fallout 3 DLC plan, it appears to be one episode of many. We have to hope that whatever Gearbox has planned for its DLC, it’ll be significant enough to warrant laying down some extra dough.

While I can’t say too much about Borderlands (embargoes and all), I can say this — it’s unlikely you’ll feel like you’re “missing” anything. There are 87 bazillion guns included in it, after all.