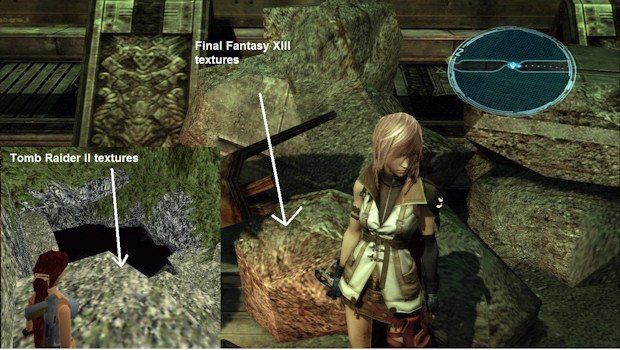 As you can see from the above damning evidence, we have uncovered proof that Final Fantasy XIII‘s graphics are no better than a game from the original PlayStation era. This image has been circulating the Internet for a little while, and it provides compelling reasoning for the argument that Final Fantasy XIII is rubbish and only idiots could ever want to play it.

We would like to salute the hero who literally left no stone unturned to prove that Square Enix, possibly due to the Eidos merger, is now ripping off assets from the PlayStation-era Tomb Raider II and shamelessly reproducing them in the game. Was this part of the deal, Square? You can take the money out of the hat, but you can’t take the moneyhats out … of the thing … with the thing, there.