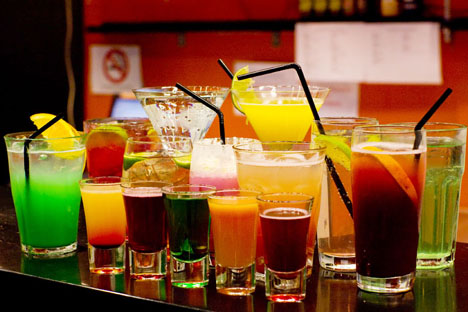 I don’t know if you remember hearing about the Mario Bar, an event created by the folks at the IT University of Copenhagen in Denmark. I remember thinking that their Yoshi cocktail sounded delicious! The same group of people from the school’s Media, Techology, and Games Masters program have created another themed night and drinking event, this time focusing on the world of Final Fantasy.

Final Fantasy Night took place at Scrollbar early last month. It followed the same formula as the Mario Bar, with game-themed decorations and original cocktails. They created 15 drinks/shots that all sound great, and they were actually priced in Gil. The most popular were Waltz on the Moon, Summoner Yuna, and Aerith. Their Life Stream cocktail sounds like epic mouth win. The best part is that they include the drink recipes for those that want to try their own turn-based drinking battles.

Check out the Final Fantasy Night Web page for some great pictures of the event.

Destructoid should steal this idea! What other franchises could we cover? Persona Night? Call of Duty Bar?

Filed under... #Final Fantasy#Things gamers do