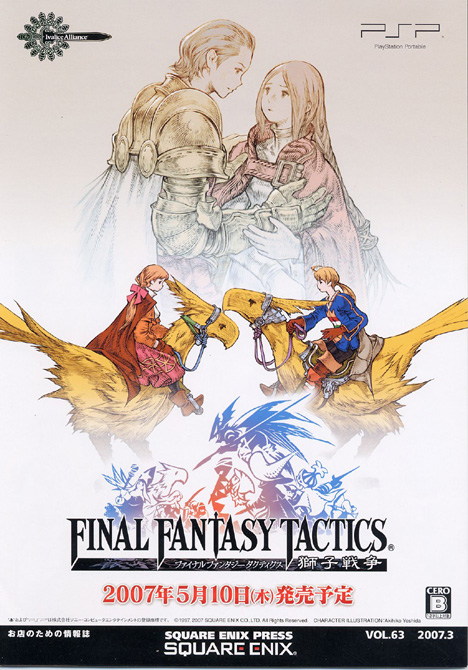 Need I preface this article with my brain paralyzing love for Square? I think not. I have to say though, at GDC I played a PSP and for the first time thought I might actually want one (which is inconvenient because I can’t make fun of it anymore if I buy one). With the upcoming release of titles like this and Crisis Core, it’s quickly becoming a must have on my list.

Final Fantasy Tactics: The Lion War celebrates the ten-year anniversary of the original game with expanded features such as multiplayer, co-op modes and anime-style cutscenes. Final Fantasy XII players will be pleased to see that Balthier plays a role in this title (I love his cutesy anime restyle here). The Japanese release date is set for May 10th, with no specific date set for stateside release yet. Never fear, my little robots, surely it’ll be here soon enough.

This info came from Square Haven, which is a superlative source for those of you who channel your adoration of SquareEnix’s work through your every pore. Rather than just taking the obvious fanboy route, the editors have a variety of objective input on where Square is going, which is refreshing. We need more level heads in the game universe, rather than the usual garden variety of people we all dream of stabbing in the face.