As you may, or may have not of heard, June 26th was the day that Square Enix released the 20th anniversary edition of Final Fantasy I for the PSP. To commemorate the occasion, the fine folks at the PlayStation store, located in sunny San Francisco, hosted an event for the fans of the long running series.

The first one hundred people in line to buy the game were guaranteed an extra piece of swag along with their purchase, not to mention being part of the gazillion people to buy Final Fantasy I – again.

As always, Destructoid was there. 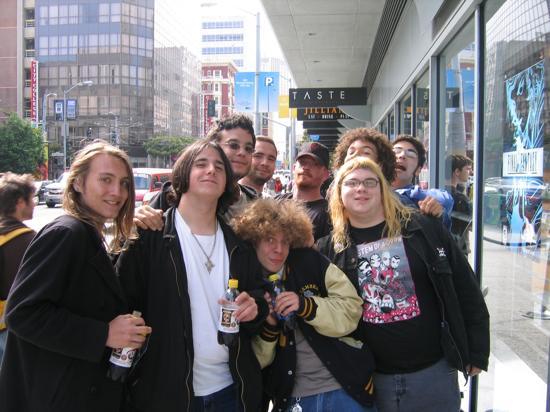 From left to right, I hope, are: Will, Gavin, Randall, Ben, Wren, Tommy, and Eric (ignore the second afro kid and the guy to his right). This somewhat motley crew, had been waiting in line before there was even a line to speak of.

Arriving as early as midnight the previous evening, Tommy, Randall, and Wren had staked out their territory. But finding that they were the only ones in attendance, so far, they decided to take a nap in their vehicle, followed promptly by a nice meal at Denny’s – and lost their envious position as numero uno of the FF Brigade.

That ever-glorious position was now occupied by the likes of Will, Gavin, Ben, and Eric. Four gentlemen who had arrived on the scene at roughly 4:30 a.m., but, were still bright eyed and bushy-tailed (at 4 p.m.), when I asked them this question:

“What could make a man stay out all night, in the cold, surrounded by the denizens of the harsh streets of San Francisco, just to purchase another Final Fantasy game; a game that has been released, and re-released, many times over, on different systems, and available (emulation style!), on any PC?”

I can’t say that I wasn’t surprised by this answer. In fact, with the draw that this game still commands, I have a strong feeling that any offspring I may potentially have will be uttering these very same words when they ask me for their allowance. Which, of course, will be fine by me, as long as they’re dressed in cosplay when they ask.