After making one The Old Republic character get stuck and playing another one for 3 full minutes last week, I ran off to to meet up with the radiantly friendly Robin Hunicke, producer at thatgamecompany, and Jenova Chen, co-founder and creative director, to talk about their upcoming PlayStation Network game Journey. You might remember thatgamecompany (TGC) from the PSN hits flOw and Flower.

So far, not much is known about their third game at all. We have seen some screenshots, but otherwise the only tangible info out there is that “Awakening in an unknown world, the player walks, glides, and flies through a vast and awe-inspiring landscape, while discovering the history of an ancient, mysterious civilization along the way.”

Yep, that sounds like a journey alright. Thankfully, Robin and Jenova were happy to shed some more light on what Journey is about for you guys. What does it mean?!

Something you should know about TGC beforehand is how much feelings play a part on all levels of their development process. I know, it’s scary, right? Of course the end result of this approach is pretty obvious to most of you who played Flower.

This emphasis on the importance of feelings translates directly to Journey. The game was inspired by Jenova Chen’s feeling that we live in a world full of power. The power to travel to any place, the power to talk to anyone in the world on the phone, or even the power to access the world’s information through the Internet. At least, you could say that of people who own a console.

In the vast majority of games we have a similar relationship with power. We have control over life and death in a strategy game, follow an archetypical hero as he becomes progressively more powerful in a role-playing game, or fulfill teen power fantasies in Big Bulky Man Shooter XX: The Sequel. Journey aims to make you feel the complete opposite of that: the sensation of child-like wonder and smallness.

When I asked if by smallness they meant child-like smallness or more like a baby, Robin said it depends: “Maybe you start as a baby and maybe you grow, as you go through the journey. Life is a journey, so … who knows.” 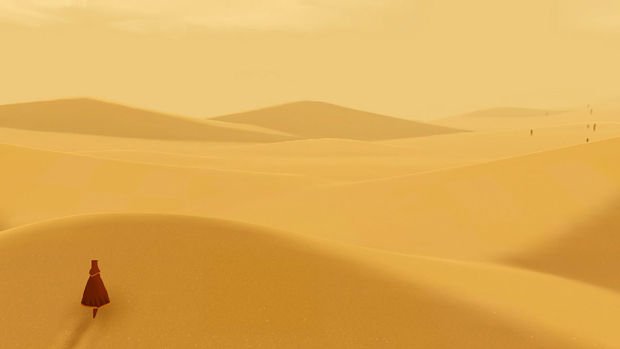 Jenova elaborated on the diametrically opposed feelings of power and powerlessness by sharing a story about an experience he had with an astronaut. Astronauts have, after all, rocket-scientist levels of intelligence, among the most “hard science” kind of people in the world. Yet those that go to the moon come back very religious and spiritual.

Jenova’s interpretation of why that happens is that when you are out there on the moon, alone and surrounded by the vast emptiness, everything you thought you knew about your life and life in general becomes small and irrelevant. You start to wonder about things you never wondered about before, living in the digital age where you can find the answers to almost all of our questions on the Internet, except for the question of why we are here. Only through absence do you truly recognize what was there.

Journey, a multiplayer game that can be played solo, tries to elicit such feelings of powerlessness by thinking about what creates such a state. One of the ways to do that is to focus on feeling alone versus feeling together. After all, you don’t miss being together until you are alone. But how do you create something like that in a multiplayer game as opposed to having a scripted single-player game to design around it?

One of the ways Robin and Jenova explain this is the example of choosing to take a long walk in the wilderness. You know you’ll spend most of the time by yourself, but if you happen to cross paths with another person who is walking in the opposite direction, you would probably greet that person. There would be a feeling of an innate connection between the two of you, being human beings, regardless of the age, gender or sex of that person.

In Journey, they want to create that feeling of two passing strangers, not to be confused with meeting another player in an MMO who then either ganks you or starts pointing and laughing at your gear. Jenova also wonders about the relationship with another player, as in the usual multiplayer shooter you tend to think about shooting  first and communicating second. But what if you strip that power from the player and you can’t shoot? Will the other player come first, or will you do something else entirely? 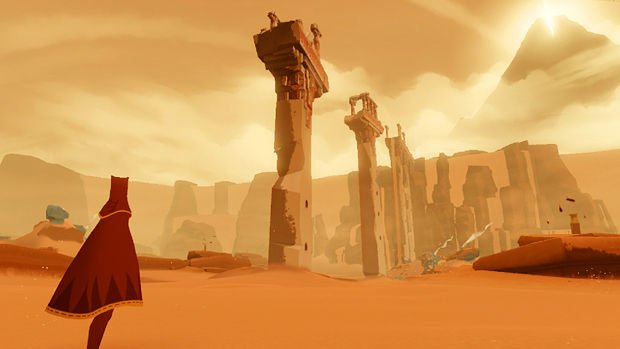 While you can find a connection with other players when each of you is on your journey, the game will allow you to choose to seek togetherness or go solo, just like some people prefer to live their life’s journey, together or alone. Jenova stresses that feeling alone is not their main goal, though; it is just a part of creating a sense of being small and the sense of wonder to the world around you.

Of course, such a painfully tailored experience, which is aimed at insulating the player, can easily be shattered by 12-year-olds shouting “Where do I go?” Thankfully, Journey will only have very primal forms of communication inside the game. For instance, you can make a little call to other players, or make a larger one, to communicate different things. Robin also mentions that when you walk in the sand you leave a trail and that perhaps players will communicate in that way.

But right now, they are still experimenting with the means of communication between players. Let’s hope they find a way to make Trophies pop up in an in-game way as well, as those are the most-persistent immersion breakers in console games these days.

Another, more physical way of creating feelings in Journey is the way your character interacts with the sand. One aspect of this is that just walking around in a large space can become very boring, perhaps similar to how reading a summary of Flower‘s gameplay without playing it can be boring. Jenova therefore thinks that every single movement needs to be interesting, to have some amount of engagement with the environment. Robin mentions that they’ve been calling this “Deep Movement” at TGC: being able to feel different types of movement throughout a game at any point in time.

Again, something we’ve seen in practice before in Flower. In fact, for TGC it is now a classic motive to bring something forward that typically only plays a background role in a game, such as movement or the environment. They admit that TGC has only existed for four years, but it’s hard to argue against this motive if you look at their other games. 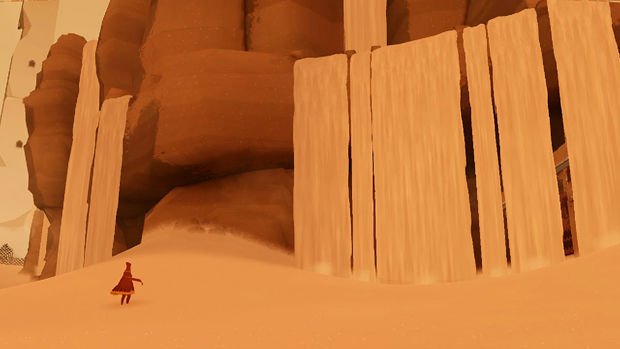 Finally, although they didn’t want to talk too much about the story (there will be one) and the gameplay (it will have gameplay), Robin mentions that there will be an element of cloth in the game: “Pieces of cloth that you can call to make them come to you […] give you a small piece of cape that you can use to fly, like a small bit of momentum, and then when you are near cloth, larger pieces of cloth especially, it will cause you to become lighter and harmonize a bit and then you can float up high.”

Naturally, that means there will be either a platforming element in the game, or cloth is a metaphor for marijuana. Perhaps there will be a Trophy for sharing cloth with five players named “I got 5 on it”?

The aim is for us to finish the journey within 3 hours, so you can play through it once in one sitting or play it to relax after work. It is meant to be similar in lenghth to the time you take for other entertainment, like going to the cinema.

It also definitely feels like TGC is primarily targeting a more adult audience that is willing to undergo their continuous exploration in eliciting different kinds of emotions in game. Some of the elements should add replayability and together with the multiplayer component, you can probably put enough hours into it.