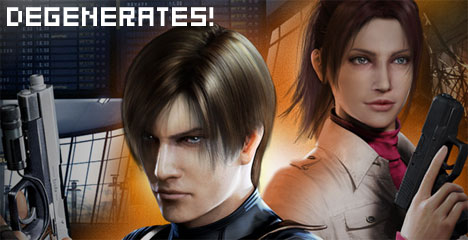 While we most certainly won’t be playing Resident Evil 5 this year, we’ll all just have to settle for the Capcom and Sony Pictures produced CG film, Resident Evil: Degeneration.

Co-directed by Devil May Cry 4 producer Hiroyuki Kobayashi, Degeneration will be getting a Blu-ray release in North America some time later this year. Capcom’s Chris Kramer has the first details on the release, including a slew of extras:

Fancy stuff, for sure. Let’s hope the movie itself can stand up on its own. From the trailers I’ve seen, it looks just about as good as the CG cut-scenes from Resident Evil 1 through 3. That is to say it doesn’t look so hot.

But I’m looking forward to being proven wrong, and will probably be first in line to pick up Resident Evil: Degeneration later this year. Why? Because I’m a sucker for both Resident Evil and zombies, and Capcom has me by the balls with this one.