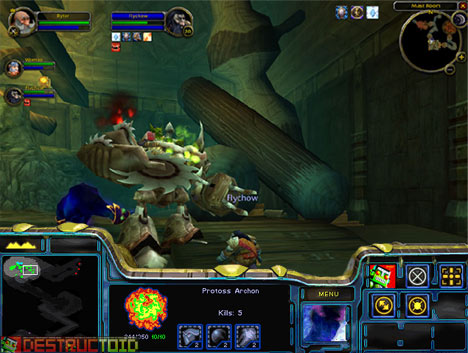 Dtoid reader dprime sent in this week’s Fake Game Friday idea. We encourage goofy, outrageous, and impossible game idea submissions, but we also love reading concepts for games that not only would work, but should be made. The  setup that dprime lays out has a bit of wishful thinking, but that doesn’t mean it’s not something we demand from the industry.

For years I’ve had a game idea in my head where it’s an medieval MMO game that maps Earth’s countries and sets up account locations based on where you live. That way when I sign up I can literally go to war with the gamers down the street and around the block. That’s one of my dream MMO games, but dprime’s idea is probably even more demanding since it asks for MMO and RTS gameplay mechanics to unite. You can read his detailed descriptions after the jump.

Got a fake game idea of your own? Send your ideas here!

I believe Real-Time Strategy is the greatest genre. Here is how I would make the greatest RTS and my favorite game:

– Make it an MMO as well. A bunch of civilizations all competing online on a huge map. Make each map (or planet: see later) about 50 times as long and 50 times as wide as a single-player map, making it 2500 times as big and allowing about 1 000 – 10 000 users in each universe (or planet within a universe.)

– Extreme zooming. You can zoom out to the entire map or all the way in on one small unit. No previous RTS has let you have so much room, although Supreme Commander apparently will. This will allow a mix of units and buildings with vastly different sizes.

– Tons of units, all controlled individually. Age of Empires and C&C were limited to a relatively small number. The Total War franchise allowed several hundred, but they were controlled in pre-made groups. Give us the best of both worlds by allowing us 1000+ units, all of which we can move around as individuals.

– From the stone age to galactic travel. Starcraft gave us the future, as well SC. AOE gave us the past, and Rise of Nations and Civ gave us the past as well as the present. No RTS so far, however, has started way back in time AND let us go way into the future; the closest to this was Civ and RoN which put us to about 2050, but nothing special. I want to work my way up from the Palelolitc ages to an age of sattelite lasers and spaceships moving at the speed of light. Multiple planets in the game world, anyone? That can only be travelled once you develop the necessary technology.

– No population cap. Make your civilization as huge as time will allow. Perhaps make the cap some giant number like 1400, so people with that many units can show off. Like they reached level 60 (or now 70) in WoW… not that I play WoW. But make it almost impossible to reach.

– A high number of realistic resources. No game so far has included more than a few; I believe RoN had the most with like six. I think the blizzard games only had two! Anyone for eletricity that you need power plants to create?

– No magic. RTSs with magic are ghey (as well as gay, but mostly ghey, which is worse) and take the fun out of a rational strategy game. None of that! I’m looking at j00 Warcraft!

– Feed your population. Allowing units to live forever with a pre-set, finite amount of food always bothered me. Make us continue to pay up a small, steady amount for every unit we leave on the map. It will encourage us to pick what we need and what we don’t (without limiting us like a pop cap does,) and to kill off the unnecessary.

– Trade with other civilizations. A few have had this, but it was always primitive and didn’t make me feel like I was really trading. I’m looking for “offer this much for this, see if they accept” sort of thing.

– Consider resource position and transportation. I chop down some wood on one side of the map and suddenly I can make a building on the other? It’s not working for me, guys. Allow resources to be moved from building to building with transportation units, and require there to be enough resources in THAT building for you to make a given unit. Also, when constructing buildings, I imagine transport units could sit beside it to provide the site with the needed resources. And villagers can carry a certain amount as well.

– In battle, allow me to control the action. Integrate an FPS-style segment by allowing one to double-click on specific units to control them in battle. Make it seamless by giving the user the ability to switch to different guys without going back out, and to go in and out quickly. This would give one an even deeper sense of involvement and make battle-strategy even better (for example, if a unit can perform two kinds of attacks, the user would know better than the AI when to make which and at whom, etc.) Imagine controlling a general first-person and giving other units commands in battle.

I could write about this forever, but I’m not going to (yet.) One day, even if I have to do it alone, I will create this game. And if no one else likes it and/or no publisher buys it, I’ll just play it myself all day.

Filed under... #Fake Games#StarCraft#World of Warcraft