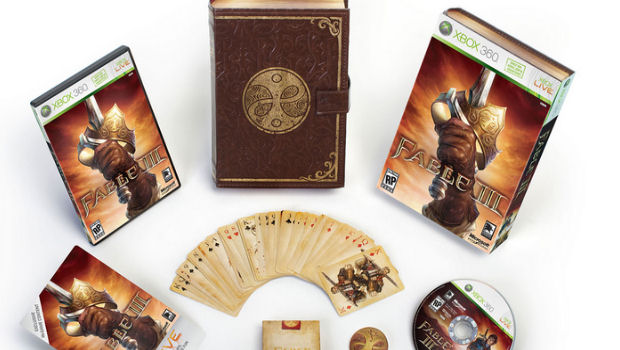 If there’s one thing the games industry needs, it’s more collector’s editions, and far be it from Fable III to leave us wanting. Lionhead has today revealed the contents and pricing for its collector’s edition, as well as confirmation of a PC release.

The collector’s edition costs $79.99 and will run alongside an obligatory standard edition. The PC version costs $49.99 and will be available as a retail disc or as a Windows LIVE download, because Microsoft is still persisting with that turgid bollocks. As for what’s in the special console version, here’s what it includes:

Interestingly, it seems that nearly everything in the CE is some form of in-game content, outside of the cards and the coin. While the content looks tempting, I’m not sure how many players will relish the idea of paying eighty bucks for DLC without getting the usual cool toys and books that we’ve come to expect.

Mind you, most people are imbeciles, so…