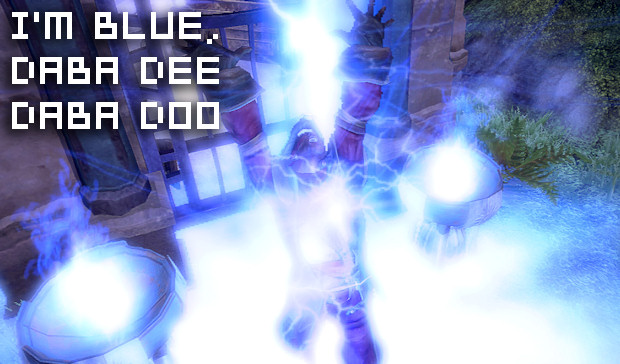 Lionhead Studios has announced the second piece of DLC for Xbox 360-exclusive Fable II. Titled “See the Future,” the new content will charge players with the task of lifting curses from three mysterious items possessed by Murgo the Trader. That’s the guy who sold you the music box at the beginning of Fable II, in case you didn’t know. Quite how he’s still alive or at the very least still working after all this time remains to be seen, if they choose to explain it at all.

Along with this apparent ability to live forever, Murgo also has new trinkets to help players in the game, including a potion that “can transform canine companions into new breeds.” Two new quests have also been detailed: “The Ghosts of the Snowglobe” and “The Cursed Knight.”

The Colosseum is a new area, one which is said to “put the Crucible to shame,” and the obligatory bevy of brand new items are also in attendence. Hit the jump for the press release, which contains all the juicy deets.

The future of Albion awaits discovery. In the latest game add-on for “Fable II,” the award-winning role-playing game that has sold more than 2.6 million copies worldwide, players will encounter challenges unlike anything a hero has faced before.Available in May exclusively on Xbox LIVE Marketplace, Microsoft and Lionhead Studios keep the “Fable II” adventures going in “See the Future,” an action-packed journey that requires players to lift the curses placed on three mysterious items that have come into the possession of Murgo the Trader.

In “See the Future,” players will be given the chance to heed the call for a hero to restore color and balance to the world, or let Albion fall to the wayside. Those who emerge victorious will receive the ultimate reward: a quest that provides a vision of Albion’s future and what lies ahead for those born into the heroic bloodline. The fantastical new quests in “See the Future” will bring players face-to-face with new characters, creatures, events and legendary artifacts, including:

Murgo: Having first met him during the childhood sequence of “Fable II,” Murgo returns to Bowerstone Market to bring an amazing array of new wares, including potions that can transform canine companions into new breeds.

The Ghosts of the Snowglobe Quest: Holding a disturbing secret, the small model village inside it was once a real town in Albion. The people who once inhabited it are now ghosts condemned to endless torment until the shadowy threat that cursed them is defeated.

The Cursed Knight Quest: Forever banished to a land beyond the dead, the Cursed Knight awaits a hero who has the strength and will to dress up in convincing costumes, even imitating a hobbe or balverine, to save him from his fate.

The Colosseum: The Colosseum puts even the Crucible to shame. Only the greatest heroes have triumphed here. Players’ abilities will be put to the test to prove themselves in combat once and for all, to win the ultimate in prizes.

In addition, “See the Future” offers free unique items* to all, including Welley’s soldier helmet and other clothing, a braided ponytail and other hairstyles, psycho Jester make-up, a new hero expression, the back flip trick for canine companions, and a collectible Murgo the Trader gold statue.

The “Fable II” “See the Future” game add-on will be available for download exclusively on Xbox LIVE Marketplace in May for 560 MS Points for the premium content package. “Fable II” is available exclusively on Xbox 360 and is rated “M” for Mature by the ESRB and PEGI 16 +. Three new screenshots from “See the Future” are available at: https://www.lionhead.com/Fable2/SeetheFuture.aspx. For more information, visit https://www.xbox.com/en-US/games/f/fable2/.

* The free content update must be manually downloaded from Xbox LIVE and will enable those who haven’t purchased the “See the Future” premium content to continue the co-op action with their friends.