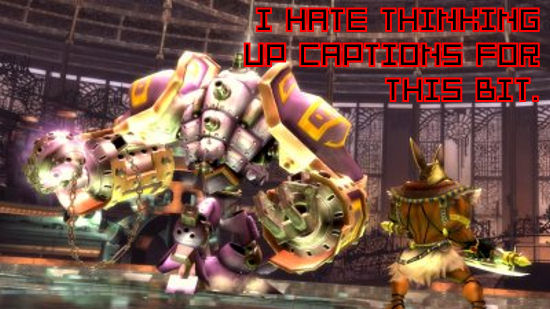 It would seem that Sony is still hell bent on stealing Nintendo’s thunder. Speaking with CVG yesterday, Sony boldly stated that its Eyetoy technology has more potential for motion sensing gaming than the Wii, and it would seem that the PS3’s extravagant Eye of Judgement will be used as proof of such bold claiming. If you’re not aware by now, Judgement uses the Eyetoy camera to read a set of cards and draw from them monsters that can be used in-game. It’s almost like the Yu-Gi-Oh is becoming a reality … and that’s terrifying.

EoJ‘s director Kazuhito Miyaki was the one to expound on the Eyetoy’s potential. “All of the different Eye Toy games that we’ve made so far and the wide range that we have delivered shows that the camera isn’t the key device, it’s what we do with it that’s important,” Miyaki claimed, before drawing direct comparison with the Wii. “In Eye of Judgement it’s all about summoning the creatures. With other games it’ll be about creating a whole different dynamic so, in a way, you could say there is much more potential and ability in our technology.”

But can the Eyetoy glow blue when some idiot messages you to say he sent a Mii that looks like Samuel L. Jackson? No, it doesn’t. Wii wins THIS round! Har har.

[TheGoldenDonut is win, Next-Gen is also, a bit]