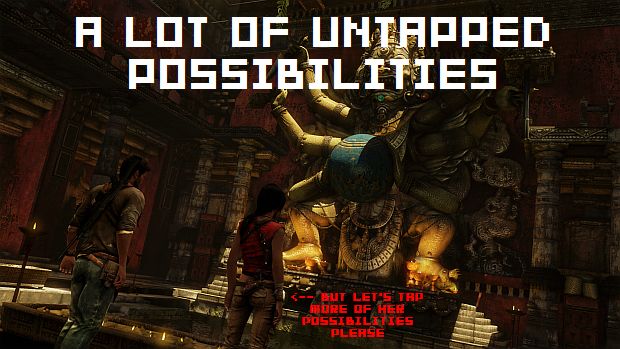 Nathan Drake. He’s a man men want to be, and a man most women would probably not find utterly repulsive. Sure, attribute this to the jaunty rugged v-neck and matching holster. It’s pure class, after all. But it’s more than that. Nathan Drake, and more so the Uncharted franchise, is really popular. If early reviews and impressions have anything to say about Uncharted 2, Sony has the next big franchise of this console generation on its hands.

So if you follow the jump for my interview with Amy Hennig, the Creative Director of Uncharted 2, you’ll find that the question on everybody’s mind is, “What’s next for Naughty Dog?” Hennig says it mildly cryptically: “There is no limit to how many games we could make, as long as people still want to see more adventures with Nathan Drake.”

“Obviously, none of us want to wear our welcome out,” she continues, “but we are still having a lot of fun with it, and we think there is a lot of untapped possibilities there. Certainly we will be exploring that some more.”

Okay, well maybe that is not a clear answer, but an answer all the same: expect more of Nathan Drake in the future from Naughty Dog. But that’s not all that Hennig and I discussed. We talked about the cinematic experience of multiplayer, how the beta affected the completion of Uncharted 2, and more. Hit the jump to see what I mean.

DESTRUCTOID: Can you describe for me the process that you went through to create multiplayer for Uncharted 2? This is a new feature for the game.

Amy Hennig, Creative Director of Uncharted 2: Among Thieves: Well, we got a lot of advice from our pals in the games industry, so it’s nice to have all of that. We have a lot of close friends in the development community, especially down in LA, who had done this before. That was nice, because it gave us a leg up.

In fact, what’s nice about the multiplayer is that by having these few betas, it has actually allowed us to tune and improve the single-player experience, because the mechanics are identical.

I’ve noticed that Uncharted is a game known for its very cinematic elements. Has any of that bled over into the multiplayer experience?

Well in our co-op levels, because we have both online competitive and online co-op, we actually have mini story missions. I mean, they are very light on story, but they give a little bit of a goal, a little bit of a presence, so that when you go in there with a couple of your friends, you have something over that half-hour mission that is a goal. Whether it is a mission that is taking out an enemy installation or saving somebody or capturing a treasure, that kind of thing.

A lot of the little story moments were mo-capped, just like what we would do with the regular single-player. Of course, all of the dialogue was performed by our actors in the studio, just like everything else. So it is benefiting from our experience doing cinematic stuff of doing story and dialogue in the single-player mode.

Well, you know, I’m going to be a little careful, because I have been out of the office for about three weeks, and I want to make sure I’m not saying anything I’m not supposed to say. I’m going to have to be a little judicious on this one. [laughs] There are definitely modes that have not been included in the beta, certainly maps, skins, perks, a lot of that kind of stuff. I think people can start intuiting what is there.

I think in terms of the co-op, we’ve only shown half of one of the co-op missions, so there is a lot more for people there to discover. The beauty there, of course, of the online stuff, is we can continue to upgrade the experience and add to it through downloadable content, a lot of which we can do without people having to update anything. It’s an automatic update, so it’s very cool. I’m very excited about it.

Now Uncharted 2 is completed with Naughty Dog. What can we look forward to from your company next?

Well, we are looking at a lot of stuff, none of which I can probably talk about on the record. I think people are already assuming, “Look, if this game does well, it seems it’s doing well, there will be more to come.” Based on the genre, action-adventure — a classic genre there — there is no limit to how many games we could make, as long as people still want to see more adventures with Nathan Drake. Obviously, none of us want to wear our welcome out, but we are still having a lot of fun with it, and we think there is a lot of untapped possibilities there. Certainly we will be exploring that some more.

Well, thank you very much, and I appreciate talking to you.