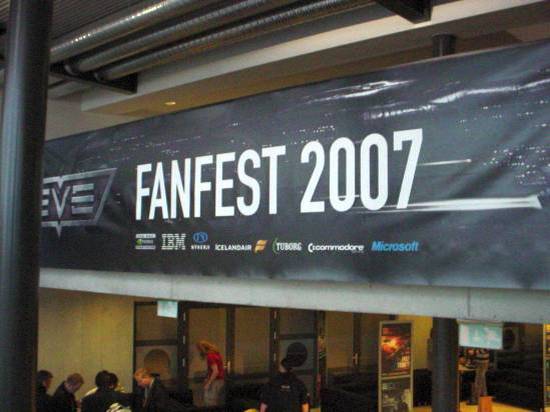 After two hours by shuttle, twelve hours by plane and an hour cab ride into the city, I’ve finally arrived in Reykjavik for this year’s EVE Online Fanfest 2007, CCP’s yearly get-together at the top of the world for players, developers, and nerdy press types like yours truly.

Though it’s been awhile since I’ve been properly addicted to the game, infiltrating the ranks of surly space-farin’ rebels and corporate masters reminds me of what I love about EVE — these people take their gaming seriously. The stakes are much higher than successfully pulling off some 20-man raid and getting your Cloudsword of Valhallastrike or whatever — there are politics, intrigue, and honest-to-God espionage going on. Truly epic stuff.

Attendence of this year’s Fanfest is supposedly ’round a thousand or so, a great majority of that number being players. All the major corporations and alliances are represented, and players from all over have hopped the pond to be a part of this year’s festivities. On this, the first day of Fanfest 2007, most everybody is content to pick up their swag bags, hobnob with corp and alliance buddies, sleep off the jet lag and bask in Iceland’s God-forsaken winds that freeze the nipples right off of you. Things’ll really start jumping tomorrow. For now: photos! Of note are some nigh-pornographic shots of my Fanfest press swag-bag, wherein I was gifted a pair of EVE Online-branded socks. Absolutely appropriate given the venue.