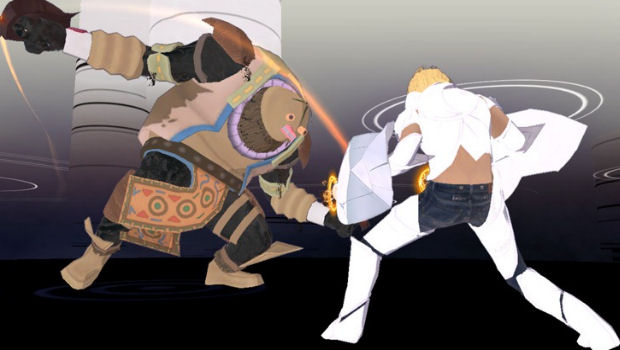 It’s been a while since we got to chat about El Shaddai: Ascension Of The Metatron, so it’s fortunate that Ignition has spewed up a luvverly bunch of fresh screenshots. Now, I could tell you why I’m excited for this game, but I think I’ll let the ESRB do it. If anybody can make a game sound great, it’s those guys:

This is an action-adventure game in which players control Enoch, a man who must prevent fallen angels from destroying humankind. Players punch, kick, and use a magical sword to defeat a variety of fantastical creatures (e.g., robots, armored animals) and human-like enemies. Some sequences allow players to engage in melee-style attacks: battles are highlighted by grunts, cries of pain, and clanging sound effects—defeated enemies disappear in brief puffs of smoke or bursts of light. In one sequence, two boar-like creatures are depicted in masks that emit red streaming liquid from their eyes. The dialogue sometimes contains suggestive material (e.g., “[Y]ou defiled your bodies and bore the Nephilim through the blood of the flesh” and “I granted wives to satisfy their lust and that they might bear children.”).

Now I think that pretty much says it all, don’t you?

More Pretty El Shaddai: Ascension Of The Metatron Screens To Gawk At [Siliconera]