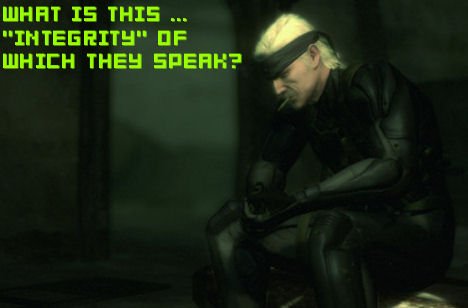 Tycho of Penny Arcade said that if you run a publication that reviews videogames, you need to have a review of Metal Gear Solid 4: Guns of the Patriots. This is a need that Konami is well aware of, and if you haven’t heard by now, the publisher has been imposing strict limitations on those reviewing Kojima’s latest opus. Why? Because it knows those publications need their game, and will jump through hoops for their precious review. Or will they?

Rather than crook the knee to Konami, EGM has actually refused to review Metal Gear Solid 4 thanks to Konami’s demands that nobody mention the game’s alleged large install sizes and cutscenes. While IGN is perfectly fine with bowing to Konami, EGM has at least shown that its reviewers can’t be pushed around so easily. The magazine has instead compromised with a roundtable discussion of the game as opposed to a full review.

And this, my friends, is the way it should be. Unless it’s a matter of courtesy, a reviewer shouldn’t have to prostrate one’s self to publishers for a review. The gaming press right now has no dignity — it relies, like a lost puppy, on the games industry when the industry should be working to keep the press happy, not the other way around.

Sticking to embargoes out of common courtesy is something I can understand, but trading in your integrity for the sake of being “first” with a review is pretty pathetic, in my opinion. There’s a difference between agreeing to a few minor compromises (posting after a certain date, for example) and agreeing not to mention huge, important aspects of a game because you’re so desperate for an exclusive. Thank you, EGM, for showing that at least some mainstream reviewers still have their balls. May others follow your lead.