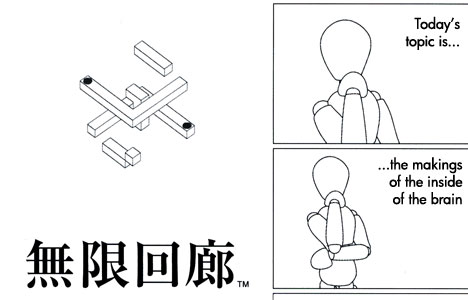 Back when I picked up Echochrome for the PSP in Japan, I got a little bonus with it: a set of four Echochrome postcards, each with their own 4-koma on them. A 4-koma is Japan’s equivalent of the comic strip, telling a joke within 4 panels (koma). Series like Lucky Star, Azumanga Daioh, and Hidamari Sketch all follow the 4-koma pattern. Just your daily dose of manga education from Japanator.com.

Japanator: if you’re looking for news about anime, manga, or anything Ja– Sorry, I got carried away there. Anyways, I’ve gone ahead and scanned and translated the four postcards that came with Echochrome. Down below are the four pictures, ripe for gallery-size viewing.

Now, to explain the running gag in these postcards. It all revolves around the kanji “kari.” You can see a pixelated version of it in echochrome175.jpg in the gallery. What this kanji means is “hunt” — specifically, the “hunting” you do in Patapon (way to double up on marketing, Sony). The “hamari” joke in that same comic is a little odd to explain. It’s written totally in katakana, not leaving me much to go on. From what I deduced through Internet matlocking, it’s a noise that’s made in Patapon — I haven’t played the game, so I can’t say for sure. The only other meaning I could gather from it would be that it’s a nominalized form of the verb “hamaru,” which means, “to fit in.” I’ll leave it up to you to decide.

Just want to thank Topher and Atheistium for their help with this project.