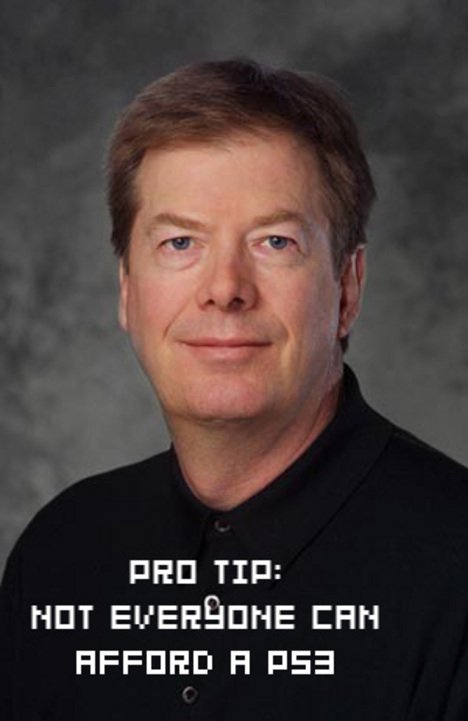 In an interview in yesterday’s Wall Street Journal, EA’s CEO Lawrence Probst, who is due to step down soon, praised Sony’s Playstation 3, and was surprised at the fact that some people thought that there would be no resistance to a $599 price point:

WSJ: How do you think the PlayStation 3 launch is going?

Mr. Probst: They ended up delivering about the number of units that we expected in North America. The interesting thing to me is that people seem surprised that there might be some resistance to a $599 price point. By the time you buy the machine and a second controller and the high-def cables and a few pieces of software and it gets taxed, you’re walking out the door with eight or nine hundred bucks missing out of your pocket. That’s a lot of money.

WSJ: Has Sony tried to do too much with it?

Mr. Probst: I don’t think they have. I’m not so sure that people have fully understood what’s in that box. They’re getting a thousand dollar Blu-ray player [for playing high-definition movies] for free in that box. It just feels like that is not being fully appreciated by consumers and it may take some time for that to happen.

It’s nice to see that not everything said about the PS3 is either hate or crazy. Sadly, I doubt that the PS3 price cut will happen soon enough to cause Sony to sell a bunch of their consoles, since their games division is losing too much money as-is. Once Blu-Ray technology comes down, along with the tinier Cell processors, I’d expect the PS3 to possibly go as low as $400.

Later on in the article, there were some other things that caught my eye: Probst goes into the realm of in-game advertising, digital distrobution, and he talks a bit about EA owned IPs.

On in-game advertising, Probst says that he doesn’t think it’ll go into the realm of generating hundreds of millions of dollars, but remain at a tens of millions of dollars level. I don’t like the fact that EA is going to continue to try and push this, but hopefully with this sort of limitation, it won’t get to a point where ads are placed everywhere, ruining the game. Probst says that the only market people are going to be selling to in these games are the 18-34 year old demographic. It’s going to suck to have them, but at this point, I have a feeling that it’s going to be unavoidable.

The interview also stressed EA’s venture into mobile games, and it seems that that is where most of their digital distrobution will be.

WSJ: At what point will people download videogames and stop going into Wal-Mart, Target or Best Buy to buy them?

Mr. Probst: I don’t think digital downloads are going to put retailers out of business anytime in the foreseeable future. When we look at our overall business in fiscal 2010, we’re forecasting all of our online business plus our mobile-platform business to be something in the neighborhood of 20% to 25% of our total business, which would suggest that the rest is still transacted at retail.

WSJ: EA has said it wants to rely less on licensing intellectual property like movie characters for its games and beef up its roster of titles that are wholly owned by the company. How has your progress been on that front?

Mr. Probst: I think this year we’ll end up with wholly owned IP representing about 40% of our business. I think we’re on a good track. Spore [a personal-computer game expected out by April next year] is obviously something that we have high hopes for. We’re resurrecting the Command and Conquer franchise, which we acquired a few years back. We’ve got Army of Two in development, which we think has great potential.

Longer term, the margins on wholly owned intellectual properties are really, really compelling. As development becomes increasingly more expensive, it just makes sense from a margin standpoint to have as large a percentage of your portfolio be wholly owned intellectual property where you don’t pay that licensing fee on top of platform fees and the cost of development and everything else.

Thank God! My biggest criticism of EA has always been that they have way too many poor licenses that just clutter up the game shelves. It makes me really happy to hear that Command and Conquer is coming back to life. Now all EA needs to do is give us more games along the lines of Freedom Fighters.