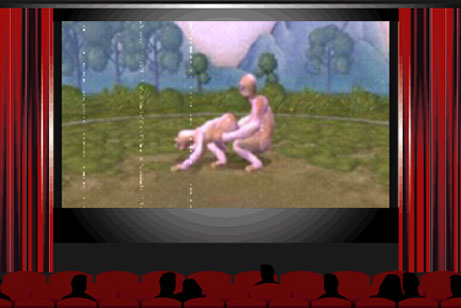 While I don’t necessarily condone videogame to film adaptations, I can at least understand how they might work. Max Payne, Prince of Persia, Doom — all games with strong enough narrative to keep people in their seats for at least long enough to tear through a bucket of popcorn.

OK, so maybe not Doom … but Spore? According to Will Wright, a film birthed from the Spore universe is not completely out of the question.

“With Spore, we’re looking way outside the game space, such as TV, movies, etc.,” he told Reuters during an Asian press tour. “We’re basically planting the seeds to spread it out to a much wider group of people than would ever play a computer game.”

I’m not even going to attempt to imagine what a Spore movie could look like (note: OK, I already did — see above image). But here’s something to think about: with both Wright and EA clearly open to expanding the Spore franchise (currently only slated to hit PC, Nintendo DS, iPhones, and eventually the Wii), how long before we see it on the PlayStation Portable, Xbox 360, and PlayStation 3?

It truly doesn’t look like anyone is going to miss out on Spore fever, does it?