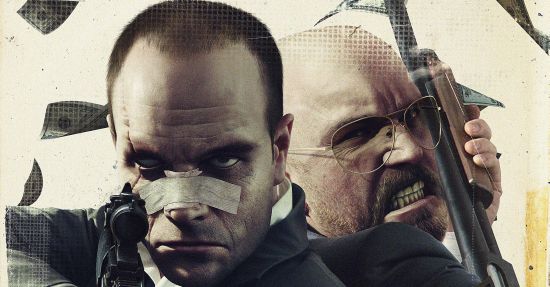 After the Conan event Eidos led me over to another room where I was politely seated … on a twenty-foot-long pile of marijuana. Each of the three massive seats in the room had glass tops and revealed dozens of pounds of drugs, pistols, countless rounds of ammunition, grenades, and plenty of other illegal pleasures. All were hidden below the backless rows of pews. It was like the church I always dreamed of attending. All of these seats are great examples of what you’re likely to run into in Kane & Lynch: Dead Men.

The story is still somewhat mysterious, with the plot filled with missing pieces that you have to recover from one mission to the next. You play as Kane, a mercenary filled with scars and flaws, and have to work with someone you can’t stand: a schizophrenic filled with medication and violent tendencies.

As I sat on my crime throne, IO Interactive ran through a few unique levels and let me watch Kane and Lynch try to push Xbox 360 to its limits. For the walkthrough of each mission, check out the full rundown after the jump, and check out the Xbox 360, PS3, and PC pictures below.

The first mission started simple: walk into a night club. Amidst the spotlights and lasers on the dance floor were literally hundreds of humans all moving around on screen at once. We’ve seen Kameo produce huge masses of animations before, but Kane & Lynch’s Glacier Engine allows each of those moving bodies to actually be aware of one another. As you rudely walk through the dance floor and slam shoulders, each person stumbles backwards and also bumps into others who also act accordingly. If you’ve seen the movie Collateral you know where this is going.

As you take the stairs up to the second floor the speakers begin to fade through the walls behind and below you. A cut scene progresses to fill in another piece of the plot and the dialogue flows smoothly with the blood coming from the first victim of the night. Now it’s time to leave the building the same way you entered, but with bullets flying as you retrace your crowded steps. As shots ring out, the dancers run and scream — but only when the terror comes close enough for them to see the danger. Instead of simply scripting chaos, they let the action take place in real time, using the artificial intelligence of the bystanders to heighten the artificial intelligence of the enemies firing back at you in the dim-lit club.

Another mission brings Kane and Lynch to the roof of a skyscraper, where they have to ambush a helicopter before it takes off. IO Interactive brings up the fact that this game’s script for the voice actors was far longer than that of most games, and it comes to no surprise. The most entertaining part of the game was just how real the dialogue felt to listen to. “Fucks” fly with bullets and the two characters know how to get on each others’ nerves to push emotions and steer the scenes. Quentin Tarantino lovers will be giddy, and more importantly, so will your friends in the room. Whenever a friend’s playing a game while I’m in the room listening while working on something else, I always find myself chiming in when stupid dialogue or mission objectives come up. Whenever something lame or overly intense occurs in the story, Lynch remarks accordingly with his complaints before you can spit them out. And instead of making things easier for the disgruntled pair as you get further in the game, the plot constantly sets them both further and further back. As their disadvantages stack up and their declining situation in the story speeds up, the dialogue only gets more enjoyable.

The next mission is the escape from the roof fiasco, and it sends Kane, Lynch and several other NPC players repelling down the skyscraper’s side to show off how easy it is to shout commands. This is no Rainbow Six ten-page instruction novel, it all boils down to three simple button maneuvers that dictate the NPC actions to “keep moving, or keep shooting, or stop and follow.” Keeping the controls from getting complicated let the scene do the complicating faster, as you’re quickly down ten floors and bullets jump out the windows to let you know when you’ve gone far enough. From here you combine the three commands with the additional options of taking cover or helping fallen teammates with shots of adrenaline.

The last mission skips over some more dialogue and plot-pushing decisions, which takes you to the bottom of the skyscraper to solidify the recurring theme of escaping despite slim odds of survival. A dozen cop cars pull up to meet you as you run out of the lobby, with crumbling pillars filling up your footsteps as you jump out the doors and take cover behind their cars. By tossing around grenades you play leap frog from one corpse-filled car to the next, while listening to Lynch screaming in the distance all the while. Instead of just flashing “Mission Accomplished!” on the screen, things continue to look rough as more reinforcements arrive. You, Lynch and your men flee down the road until you find some wheels for escape and the mission ends.

In between each level was a loading screen of mild length, but was joined with even more dialogue from Kane and Lynch to keep you interested constantly. With all this simple action and complex conversations, the whole thing felt a lot like a movie, and thanks to Lionsgate buying the rights to it we might even see more of this game in theaters. With a project as lively as Kane & Lynch in an industry that loves sequels, I asked if a series was planned and got an immediate answer of “we hope to continue the story more in additional games.”

Kane & Lynch: Dead Men won’t be out in stores until the fourth quarter of 2007, although they’ve also got a mobile version of the game in the works for a September release. And for replay value, there’s a multiplayer co-op mode that lets a friend play as Lynch in split screen mode.