That was the first line I heard from DeathSpank while waiting to play it. It’s a weird game, and that’s exactly what creator Ron Gilbert, of The Secret of Monkey Island, wanted for this upcoming summer release for Xbox Live Arcade and PlayStation Network.

DeathSpank follows a guy of the same name. When he was young he was told that he would be a superhero, but no one explained why or how. Now he’s grown, and he works as a hero of the downtrodden, defending justice, all while searching the world for an artifact he was told he needs — just “The Artifact,” he calls it, since he knows nothing about it. The joke’s on him, but ignorance is truly bliss. DeathSpank sets out to do good anyway.

If you took the humor of Monkey Island and combined it with the action of a game like Diablo, then you’d have a pretty good idea of what DeathSpank plays like. You’ll converse with people in a world “made of lazy jerks,” as it was explained to me. These jerks are out to take advantage of your heroic drive, and send you out to do things like…well, to fetch tacos. It’s more fun than we made it sound there, mind you. 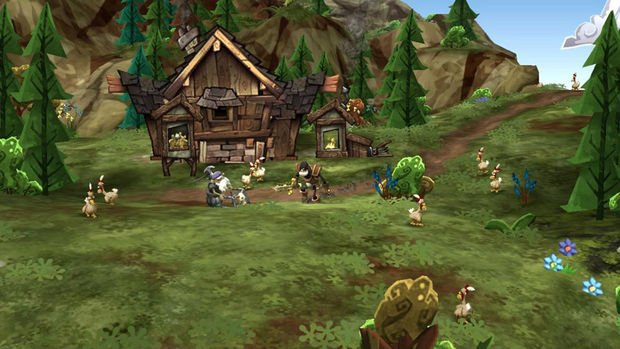 The Monkey Island-ish humor ties are obvious in the game’s dialogue trees. These trees will be familiar to fans of this type of adventure game, and the humor lines up with Ron Gilbert’s style. You’ll work through this dialogue in search of quests that you can take on. In one non-battling quest, DeathSpank is out to get a weapon he was told he needed from an old man. The old man is willing to part with it for a taco, and so you’re set out to find a particular taco vendor. You’re told that this particular taco must be spicy, must contain chicken and pinto beans, and be wrapped in a wheat tortilla. After some traveling we found the vendor (the previously mentioned “Taco Wench”) and ordered the taco, but it was missing the required spice. This set off another sub-quest, this time to find a plant called the “Hair of the Pixies.” After acquiring this, combining items created the required taco.

The actual battling quest side of the game takes place on a a spherical world that’s created from a blend of 2D and 3D, which is presented in an always-streaming fashion, which means no load times between areas. In this world you’ll encounter enemies that have life bars over their heads. You’ll start out by taking them on with a single attack button (no jumping), but will eventually find other weapons that can be mapped to any of the face buttons or the D-pad directions. I was helped in a quest to save some orphans by finding a dumpster filled with weapons. From here, it was a case of kill or be killed in some very simple action gaming. I had to run around and watch my back (and my health), all while beating down baddies that hindered my quest. 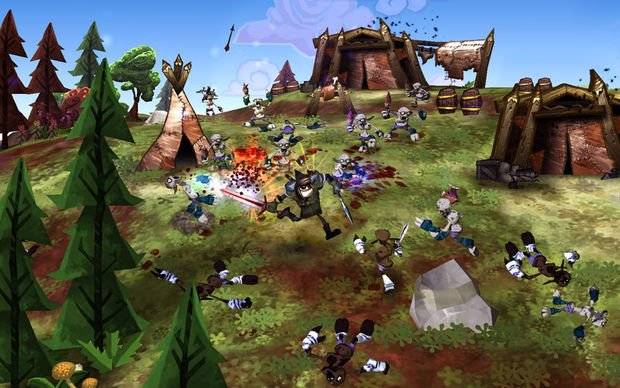 You’ll eventually level up and acquire Hero Cards. These cards can boost your abilities, like adding to your strength stats, but you can only hold six of them at one time.

DeathSpank is really simple in format. You’ll talk, find quests, set out to complete quests, and then come back to receive your reward. The story unfolds as you do this. It’s probably the least serious action game of this type ever made, but that doesn’t mean that it isn’t challenging. On the battle side, I had a heck of a time fending off enemies, and I’m told that there’s some pretty tough boss battles in the mix. The puzzle-like requirements for the quests are no slouch either. Luckily, there’s a hint-giving Fortune Cookie system. Crack open one of these items, and you’ll get a subtle hint at what to do next. Crack open two or three, and you’ll know exactly what to do.

I love the idea of a game about a guy who considers himself to be a hero even when nobody else does. There’s something that feels mischievously evil about the people of the world of DeathSpank; it’s almost as if they’re all laughing behind this hero’s back. DeathSpank is easily as crazy as it sounds, and that’s perfectly fine with us.