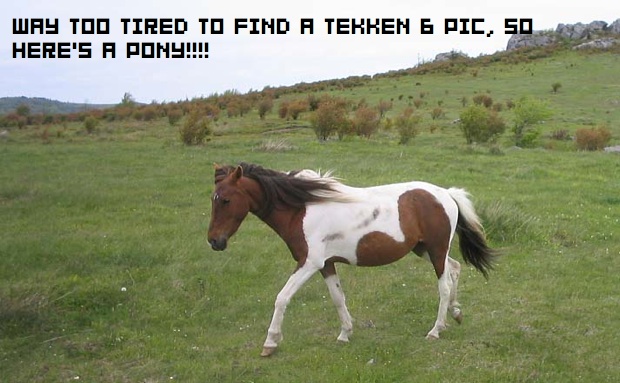 When Hamza and I went to the Konami event a ways back, I did a very brief preview of Tekken 6. The reason it was so brief is because at that time there was very little to report on. While that’s not a knock on the title in any way, there just hadn’t been anything in the way of new content to with regards to what every Tekken title has previously delivered on.

Oh, but now behold the glory of E3 and the wonderful new information it provides! Seems as if those of you that are Tekken fans will get even more content than was mentioned before. In addition to the hot fighting glory that you’re used to, Namco Bandai has announced that Tekken 6 will also have a Scenario Campaign.

Players can chose from any of the forty available fighters and progress through a single player camapign that meshes the fighting mechanics of the title with some free movement levels. Doing so will gain the player some item grabbing that they can use to enhance their characters when they go head-to-head in online competition. Also, it can be played co-op style. That’s pretty rad.

Check out the full press release after the jump.

The Scenario Campaign features a unique hybrid control system combining conventional fighting game controls with free movement. This control system allows players to progress through the story and mow down hordes of enemies with relative ease while still enjoying fighting game action. In addition to hand-to-hand fighting, players have an arsenal of staffs, machine guns, flame throwers, and even giant robots at their disposal – a first for the series!

Choose from 40 playable characters and play alone or cooperatively online with a friend through a multitude of stages while amassing a wealth of items for customizing and strengthening your characters. Bring these fighters online to deliver bone-jarring punches and dominate opponents globally.

A must-have for fighting aficionados, TEKKEN 6 sees the return of many familiar faces as well as new characters to create the largest line-up in franchise history.  Adding to the already robust gaming experience, dynamic and destructible environments will enable players to punch their enemies through concrete walls or kick them through floors to open a whole new battleground as they go mano-y-mano. Furthermore, an impressive real-time motion blur effect has been implemented to provide the richest visuals the series has ever seen.

Delivering the perfect fighting trifecta, TEKKEN 6 will also be available this fall for the PSP® (PlayStation®Portable) system with additional content, items, and an ad-hoc multiplayer mode. For more information on the game, please visit: www.tekken.com or www.namcobandaigames.com<http://www.namcobandaigames.com/>.