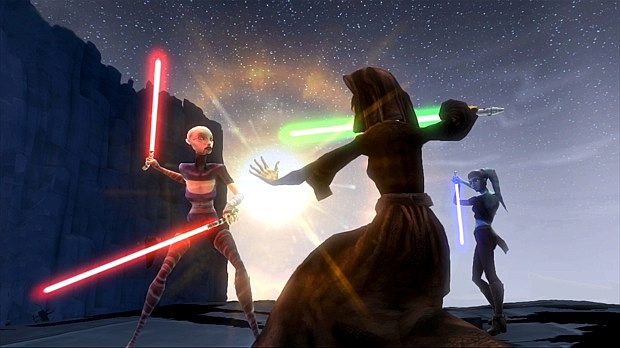 While at the LucasArts booth, I took a moment to catch a demonstration for Star Wars: The Clone Wars Republic Heroes. It’s a family friendly brawler based on the animated television show and slated to hit every current generation system known to man.

As you can imagine, it’s an accessible title. I watched the presenter using one button for the vast majority of action commands and the level I observed was nothing more than an arena for basic enemy annihilation. Like I said, family friendly.

A couple things hit me in the right spot. First, the game has style — a mixture of cel-shading and caricature. (I was told all the assets were ripped from the television show.) Second, I was drawn in by the promise of cooperative play. Despite my advancing age and being burned by Star Wars games through the years, I still have an itch to roll as Jedi with a friend. (Apparently, the cooperative is only offline.)