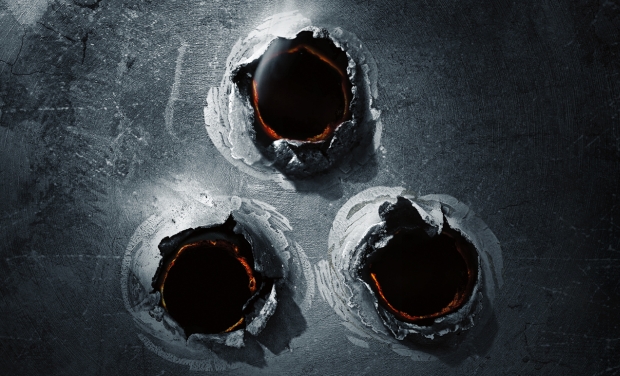 Splinter Cell Conviction was the most pleasantly surprising thing I saw at E3 today. Period.

Part of that may be that I found the franchise’s last installment, Double Agent, incredibly depressing. But more likely it’s due to the fact that with Conviction, the guys at UbiSoft have managed to create something that is not only stylistically spectacular, but — at least, as it was presented to me during a fifteen minute developer playthrough — could potentially be an even better fusion of stealth and balls-out action than anything we’ve seen before (yes, including the Metal Gear Solid series).

Sam Fisher’s daughter is dead, and he no longer has time to sneak around in the shadows like a Stealthy McStealtherson.  He’s vengeful, he’s got no support, and he’s goddamned angry. And it shows in the gameplay. There’s never been a stealth game as fast-paced and action-packed as this, much less a Splinter Cell game.

Hit the jump to see what’s so damned special about Conviction, along with some exclusive plot details you won’t find anywhere else, unless another site also managed to trick the UbiSoft representatives into admitting something they should not have.

First things first: far as I know, the Sam Fisher we saw in the early concept footage — you know, the one who more closely resembled a hobo than a special agent — is nowhere to be found in Conviction. Fisher’s still striking out on his own in order to find the people who killed his daughter, but he’s still as stubbly and gruff-looking as ever.

There are two things about Conviction I want to individually point out as “wow”-worthy.

Firstly, the entire story of the game is presented without cut scenes. Yeah, I know — so what? It just goes the Half-Life route and makes you stand in the cut scenes rather than passively watching them, right?

Special information, flashbacks, and general story information are conveyed by what appear to be image projections on the environment you’re in. For example, the very first portion of the demo involved Sam Fisher interrogating some dude in a men’s bathroom. As he beat on the guy by throwing him into doors and urinals, he began to squeal about some dude who ordered the hit on his daughter. As he described the man, a grainy, black-and-white film of the man in question suddenly appeared on the restroom wall behind Sam. His name appeared next to him on the wall as he gestured angrily at someone with a cigar. Neither Sam nor the schmuck he was torturing acknowledged the film playing on the wall; it was like a stylistic thing meant explicitly for the player, a gracefully fourth-wall-breaking method of showing the player what Sam’s target looks like.

A transitional cut scene began playing after Sam left the urinal, to my initial irritation…until the representatives told me that these cut scenes only exist to hide the loading screens. You’re constantly in the story, constantly being given information either about the place you’re going or the mission you’re trying to complete. The prerendered cut scene ended and easily transitioned into a realtime image of Sam getting out of a car, ripping off the inside rearview mirror as he did so. The mission had begun.

Sam walked down a busy street full of civilians. This in itself is somewhat noteworthy, considering there have never been civilian crowds in any previous Splinter Cell game. I’m told they’ll react to Sam’s actions, which isn’t terribly surprising: if he shoots, they’ll run, and so on.

The rep walks Sam down a path bordered by a river. A large mansion sits nearby. Suddenly, the words “INFILTRATE THE MANSION” appear in huge text on the side of the mansion, as if someone had projected it there from across the river. This was not only a downright badass method of reducing the HUD, but it was also immediately informative: the instructions weren’t just projected onto some random building, but the actual building you have to infiltrate.

Sam climbed over a railing and shimmied behind a guard, who he then grabbed and threw off the railing. Doing so earned him an “execute” ability, which would be explained in a few seconds.

Approaching a locked door, Sam utilized a low-tech version of his optic cable from previous games: the mirror he ripped from his car. Peeking under the door, the rep marked two aspects of the environment for destruction (much like the “tagging” mechanic in Rainbow Six Vegas that can be used before entering a room): a light, and one of the two guards standing in front of the door.

This is where the “execute” ability comes into play. By taking down enemies using hand-to-hand, you earn the ability to use one “execute” at a time. By pressing a particular button, Sam opened the door and immediately (and in a depressing choice, automatically, without much player control) shot the light and one of the guards without giving the other guard a chance to react. The ability sort of functioned like bullet time except rather than the rest of the world moving extremely slow, Sam just moves really goddamn fast.

The demo continued and the rep infiltrated the mansion, saw a flashback of Sam’s dead daughter projected onto the wall, and showed off a pretty cool mixture of stealth and gunplay. Since Sam is on his own and angry as hell, he doesn’t really deal in nonlethal takedowns anymore apart from those he uses on civilians or innocents. Sam saw a bunch of thugs talking under a chandelier. In order to draw the player’s attention to the thugs while visually explaining that Sam is totally hidden, all the color disappeared from the room except for where the thugs were talking. It was as visually striking as it was informative to gameplay.

Anyway, Sam shot the chandelier and it crashed down, killing all the thugs.

He progressed through the rest of the mansion, pausing to show off a gadget (at one point, Sam threw an EMP grenade to bust all the lights in an area, then ran up and took down the now-disoriented guard with melee combat). Eventually, he reached a large room full of guards. Hiding behind another railing, the rep activated another execute maneuver and killed two of the guards, while earning the attention of a few others. As Sam dropped down to the floor a few feet below him, he left a white, glowing silhouette of where he had once been. The reps told us this represented Sam’s LKP – his Last Known Position according to his enemies. Since that’s the position where they last saw you, you can plan your attacks around that. The thugs all kept rushing toward his LKP, while Sam circled around and took them out one by one. All throughout, Sam never stopped moving and the action never seemed to let up – there was no slow-paced movement or waiting like you might expect to see in a typical Splinter Cell game. Sam uses the shadows to mask his position during gunfights and use the element of surprise, not necessarily to bypass combat altogether. Stealth is still required, but it’s stealth to a different end. It is, perhaps, the first stealth combat game I’ve ever seen. The Metal Gear Solid games awkwardly balance it out where you can either be totally stealthy or totally dumb and violent without being punished too harshly, but Splinter Cell: Conviction seems to force you into using both stealth and combat at the same time.

Which is goddamn cool.

The demo ended when Sam busted into a room full of a few thugs and the guy who killed his daughter. After busting the door down and using the “execute” move on the first two baddies, Sam hid behind some cover. Some douchebag in the back of the room threw a grenade, so the rep jumped through a nearby window and grabbed onto the outside ledge, shimmying to the other end of the room before finding his target standing at the rear. I don’t know if this grenade was scripted to go off or not, but if it wasn’t – damn. It felt like a quick, impressive, and intelligent tactical decision to make, bypassing much of the firefight entirely while still feeling like a sort of Jason Bourne/Jack Bauer balls-to-the-wall action hero thing to do.

Sam ran back into the room through the window, grabbed the target, and was surprised to find a bunch of heavily-armed commandos break in through the skylight. “If you want to find out who ordered your daughter’s death,” Sam’s target said, “you’ll go with them.” Sam dropped his gun to the ground, and the demo ended.

I was damn impressed. If the game played as well as I was being led to think it did, then UbiSoft Montreal singlehandedly managed to create a new form of stealth gameplay. I had a question, though: that LKP mechanic seems so useful, considering how much of the original games was focused around not quite being sure what your enemies were thinking or if you’d completely lost them, then how would the game not become hilariously easy?

The rep answered – with slightly more information than I’d expected.

The guys Sam was up against in this initial mission were some of the lowest-level enemies in the game, unarmored and pretty much ignorant. They’ll charge your LKP directly without thinking that you might have moved by then, but more intelligent enemies like the Third Echelon agents you fight near the end of the game will flank you and cover one another and —

As it turns out, Sam Fisher will evidently be forced to go up against his own former agency at some point in Splinter Cell: Conviction. I couldn’t get any more details than that considering the rep started kicking himself for telling me that in the first place, but that sounds pretty goddamn cool to me. Third Echelon was always this shadowy, benign-yet-slightly-fascist organization in the first four games, so I’m really looking forward to going up against some of Sam’s former comrades.

Splinter Cell: Conviction comes out in November, and will have some sort of multiplayer component that UbiSoft won’t talk about yet. If they can deliver on the stuff they showed me in that demo, Conviction is poised to be one of the coolest stealth games ever. If they were just blowing smoke up my ass and most of the stuff I saw is either scripted or really nonintuitive, the game could suck harder than Double Agent. The “execute” mechanic already rubs me the wrong way considering how it takes control away from the player and is basically an instant-win button, but the other stuff I saw seemed to make up for it.