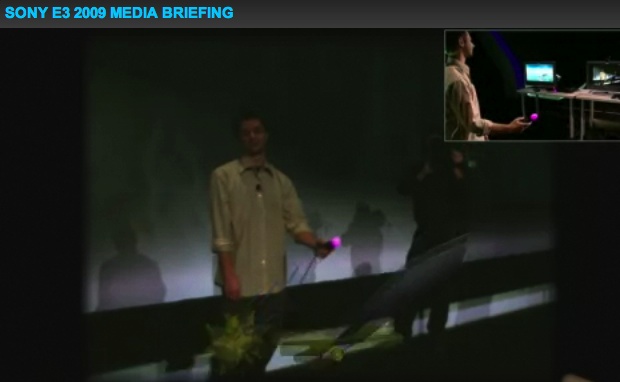 When Sony showed off their SIXAXIS back in the day, it was pretty lame. Still is, actually. But, as Sony is announcing right now at their press conference, Sony has bigger plans for PS3 motion controllers.

It may be hard to see in the photos, but Sony is developing a motion controller that utilizes the Playstation Eye to track one-to-one movements of both the player and the controller. While still early in development, the tech demos shown reflect true motion tracking and included multiple types of games that can be enhanced from the motion controls.

While the presenter stressed that the appearance of the controller is not final and won’t look as it does above, it is supposedly so precise that you can write with it. It wasn’t stated when this controller will be released, but when it is Sony will also join Nintendo and Microsoft in the motion control arena.