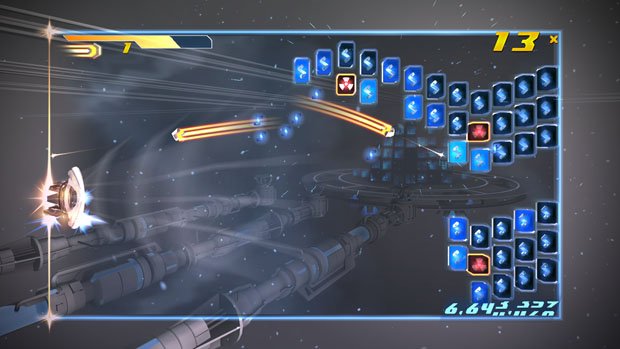 It’s not that the upcoming title from Sidhe production studio is just like Geometry Wars or its sequel, but it shares many of the same qualities that that make the aforementioned title so enjoyable. Such as, clean game design, addictive gameplay, engrossing music, and fun.

While Geometry Wars is an updated take on the idea of the classic shooter, Shatter is the latest iteration on the Breakout, Arkanoid style of gaming. Using the mechanic of moving a panel back and forth to reflect a ball towards bricks that need to be broken is the idea, but Shatter one-ups that simple concept tenfold.

As you can see, the graphics of Shatter look pretty sweet, but what you can’t see is how complex the game’s mechanics really are. Bouncing the ball to shatter the bricks is just the beginning as Sidhe has also added the ability to to attract or repel the ball from your panel (or ship, if you will).

This ability to attract or repel, or “suck and blow” as I was told, creates a different set of physics than just the old school way of managing the angles as you try and clear levels of the bricks. There’s also ways to create power-ups by collecting the shards of the shattered bricks an repelling them, or just by chaining successful hits and upping your power. Power-ups also play a part in the boss fights that occur at the end of each zone, and each of them are utilized differently creating a original experience throughout every encounter. Along with all that goodness, Shatter also has a custom made soundtrack by one of New Zealand’s premier deejays to complete the experience.