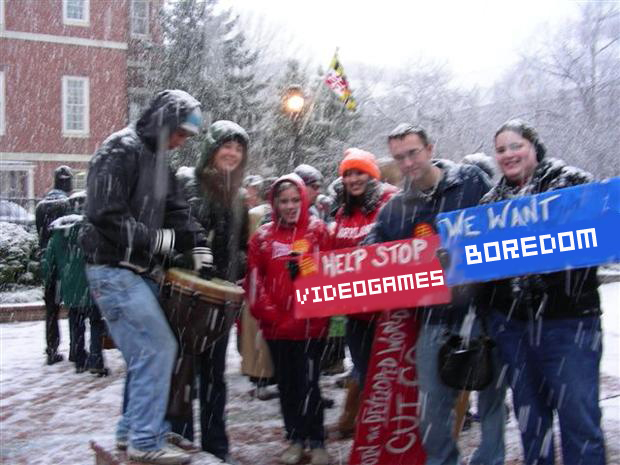 Well, maybe descend isn’t quite the right word. It’s more like they were peacefully standing outside the convention center waving signs with slogans like “EA = Electronic Anti-Christ,” and “Hell Is Not A Game.” Although, for the record, Hell totally is a game; it came out on the 3DO, no less.

So what is it about Dante’s Inferno that got these protestors, The Saved Group, so riled up? According to member Cherry Adams, it’s because they feel it “disrespects [themselves], the Bible, [and] the Christian belief.” Specifically, they don’t like that Dante can leave Hell, his usage of a crucifix as a weapon, and all the violence in general. She affirms that “we don’t need this right now in our society.”

Whoa, whoa, whoa, right now? These people do realize that the game is based — however loosely — on prior source material, right? They do, actually, but as with most moral outrage theirs’ stems from an urge to protect the chilluns: “Our youth today live in a fantasy world to begin with,” she continues, “and they don’t need any encouragement to follow in the sins that are laid out in the levels of hell.”

I will grant that it’s probably far more likely for a kid to pick up and play a copy of Dante’s Inferno (coming this fall!) then read a copy of The Divine Comedy, but even so, I think it’s a bit silly to get all worked up because a videogame uses Hell as a setting. Especially since other mediums can do it without causing a ruckus.

[Update: Some matlocking in the comments shows that this may actually just be a PR stunt. Props to EA, if so.]