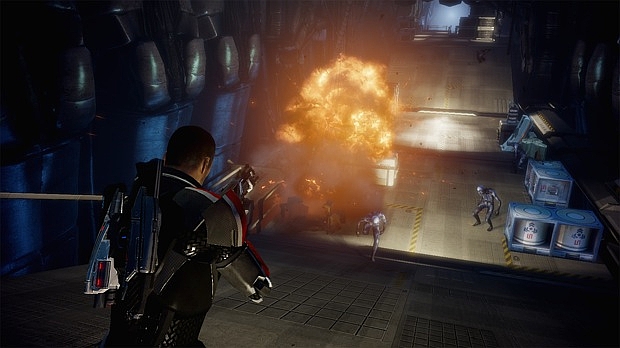 After watching a twenty-minute demo for BioWare’s Mass Effect 2, I left the poorly ventilated booth with a better understanding of that whole “Shepard is dead” tease. Mass Effect 2’s entire story-arc encompasses a suicide mission — one that no one, perhaps even Shepard himself, expects Shepard to survive. That message from the teaser is one you’ll probably hear quite often. The shape-shifting protagonist isn’t supposed to live through the mission. Literally.

The combat (radial menu confirmed) is more precise. If you aim and fire at an enemy, you won’t arbitrarily miss. Nice touch. Hit detection seems to be the new focus. Like in Fallout 3, you’ll be able to blow off limbs and specifically target areas of baddies. I watched the demonstrator take out a few legs from some robotic enemies, but was promised arms could fall off as well.

The dialogue is much more robust. Some conversations happen in real time, forcing you to make snappy decisions (think Alpha Protocol). But the truly interesting addition is the interrupt option. During some conversations, you’ll get he opportunity to pull the trigger to stop dialogue in its tracks and interject — sometimes forcefully. I watched a pissed off Shepard boot a mercenary guard through a window after not getting the response he wanted.

By the way, Mass Effect 2 looks absolutely gorgeous. I didn’t notice any texture pop in — Mass Effect 2 can stand up to the likes of God of War III and Modern Warfare 2. In other words, it certainly won’t disappoint.

My time with the demo was too short and something ridiculous was revealed to me that I won’t talk about for the sake of your enjoyment of the game’s story. But I’ll leave it at this: your decisions have some real weight that will impact Mass Effect 2’s conclusion and transfer to Mass Effect 3. Make friends and keep them close.