If you know anything about me, you know that when I rolled up on the Atlus booth today, I was just about the happiest woman alive. One of the games I wanted to get my hands all over the most was Demon’s Souls, the upcoming PS3 RPG that allows you to touch bloodstains and view the deaths of other players who have walked in your footsteps (as in real life players!) while you progress on your quest.

Interested? Can’t say I blame you. Hit the jump and I’ll tell you a little more about what I saw at this year’s E3.

One of my most wanted features in an RPG that I don’t see enough of is the ability to play co-op with a friend. I don’t mean an MMO like Final Fantasy XI, but the ability to play through a rich story and be able to share that experience with a friend. Much to my delight, Demon’s Souls does offer you that option so you can take on huge bosses with a friend’s help or force your way into PvP battles. It has online functionality too, but a very different type than you’re used to — this is the kind of creativity I wish more RPGs had the balls to put out there.

There’s a rich story of kings and quests of greed that accompanies Demon’s Souls, and it’s sufficiently dark if you happen to love that kind of thing (it makes me froth at the mouth, as you may already know). King Allant the XII, the king of Boletaria, went on a search for power and found it in the Nexus, a ice shrine, where he absorbed the power of souls. Of course, a king’s lust for power can only bring downfall to the kingdom, and that’s where you come in. 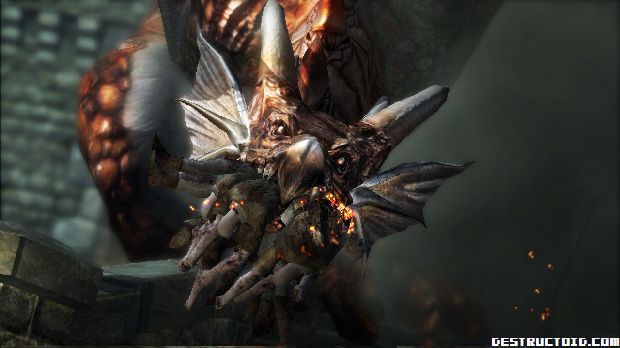 The action in Demon’s Souls falls more on the action than RPG side, but a fan of either should be satisfied by what they see. The game looks absolutely beautiful, but ten or so minutes of gameplay reveals Atlus’ signature style: the signs of brutal difficulty to come. Of course, most of you picking up Atlus titles enjoy this merciless flogging, so I shouldn’t even have to warn you.

My hands on time had me battling against a variety of aggressive knights as I got adjusted to the world I was in. I quickly noticed bloodstains on the ground, which prompted me to press a button to examine them. When I did so, I saw the ghost of the knight who had died there comeback to shadowy life. By watching him, you can see how he died — and save yourself from suffering the same fate. 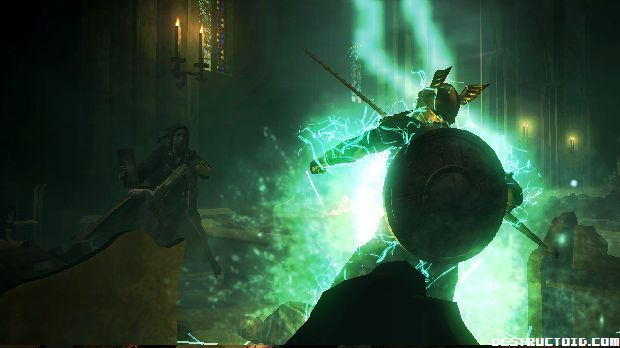 Another really cool thing about the game is that you can actually leave short notes that other players can see. For instance, if you die and you want to note that a strong enemy killed you, you can leave a message so other players can look at it. Other players can also rate these messages as useful or not useful. If you’re wondering, these messages aren’t just a blank thing you can write anything in ,but rather a series of preset messages that you can choose to customize and leave behind. In other words, you can’t write “Hey I can see your dick” and leave that for someone. I hear you saying “Awwww”, by the way.

I wanted to spend more time with Demon’s Souls, but I had to hoof it to my next appointment so I had to stop there. What I did take away though is that these gameplay elements could really bring a new level of innovation and fun to the action RPG experience, and I’m really hoping that more time with Demon’s Souls proves to me it is not an MMO in an RPG costume, but rather a completely dynamic take on the RPG formula that could really shake things up. If anyone could do that, it’s Atlus.