Any DC fan was probably already drooling as soon as they heard that Sony Online Entertainment was working on an MMO featuring the characters of the DC Universe, but I found myself wondering what it might have to offer beyond the usual level grind and endless searching for a healer that most of my online experiences seem to have consisted of.

That’s why I found myself genuinely excited to get some play time with DC Universe Online. Described as “action wrapped around an MMO”, it looks like SOE aimed to make this a game for MMO fans still in love with the concept of the genre but weary of some of it’s major flaws. Plus, let’s face it — it’s a blast to fight alongside Batman.

The only reason I quit playing City of Heroes is because I realized I wanted to forego pretty much all my real-life responsibilities to play it. MMO’s are dangerous for those with a short attention span, and I’ve pretty much tried to keep clear of them since then to preserve what sense of productivity I do have. To be honest though, after hands on time with DC Universe Online, I don’t think I can resist playing this one. 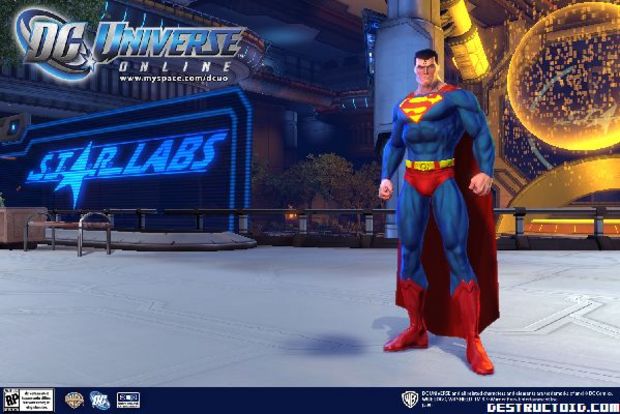 Samit has already filled us in with a ton of info in his original impressions post, so I won’t go back and repeat all that word for word. Just in case you’ve never heard of this game and have been living under Rumplestilskin’s mustache for the last few years, it’s an action-centric MMO which allows you to play as either a hero or a villain and interact with all your favorite JLA characters.

I started out by playing through two basic missions: the first was a beat-em-up that allowed me to mess around with my ridiculously powerful skills such as swinging around a giant hammer, throwing earth spikes up through the ground and picking up colossal objects to throw at my enemies. After that, I got an antidote mission that sent me off to knock out some infected and then heal them. After you do that, they get up and help you to fight, which I thought was really cool. 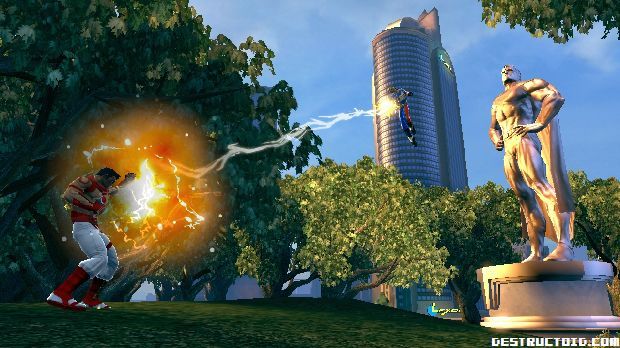 After I healed some infected, I headed deeper into the level and came across a huge boss, who I fought alongside Superman (and let me tell you how freaking awesome THAT was!). After he fell, you take his brain to a containment field, and best of all, you can use it along the way to beat on enemies with. The novelty of beating people with a massive mutant brain is just hard to describe, but I’m sure you imagine how great it felt to do it!

When I got knocked out (and by the way, there is no death in the game — heroes don’t really “kill”), I noticed the choice to rally or flee. You have three chances to rally, which simply means to rejoin the fight, but after three knockouts you have no choice and you have to flee. Your tenacity will reward you at the end of missions with a headline, which comes in the form of a newspaper boasting your good deeds in bold letters on the front page. SOE is not sure if this feature is staying in yet or not, but I hope they keep it — it really fits the feeling of the game well.

DC Universe Online doesn’t have a release date yet, and then version I saw is very much a work in progress, so a lot of things could change before it finally hits retail. What I played was really engaging and fun through, and I got the feeling this is an MMO you can play solo or wth your friends with equal ease (which is a huge selling point for me since I’m an RPG gamer at heart!). Now if I can manage to not get too addicted…