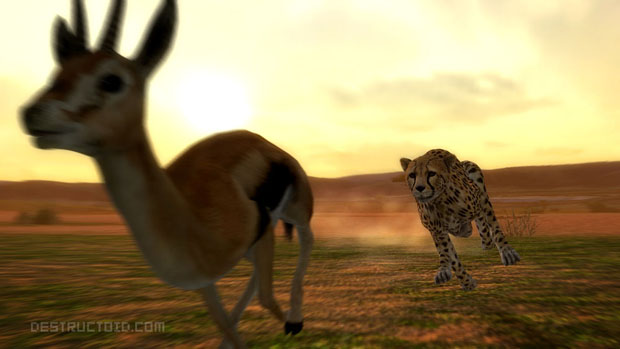 People were quick to call Sony’s Afrika a high-resolution Pokemon Snap without the Pokemon. I can appreciate that: Both games have animals (or animal-ish things) that run around a field, and both have game play that involves players snapping a virtual picture of moving subjects. But Afrika has so much more depth that it’s almost wrong to even joke about comparing the two. Or, go ahead and joke.

I’d say that Afrika would appeal more to camera buffs. Or animal buffs. Or photorealistic videogame buffs.  Or people that like to watch violent animal takedowns.

Afrika takes place in, of course, Africa, where you’ll head out on a safari of sorts, doing your best as a photographer to snap shots of African wildlife in their natural environments. Players are treated to photo- realistic graphics and fantastically animated creatures in this game, with support for the imagery coming from National Geographic.

In the wilderness, you’ll customize your camera and lenses, check your maps, and then head out to the wildnerness, where you’ll carry out assigned missions to photograph various subjects.  Good photography earns you money, but the real reward is photographs to admire, as well as unlocked visual content from the included National Geographic Library.

Photography is done in a first-person mode, with you viewing your subjects through a lens, crosshairs and all. Controls let you change everything from exposure to camera position. You’ll be able to move and reposition yourself during shoots, and even pursue subjects with a jeep. Animals that can attack you in real life can also get you in this game. You won’t necessarily die, but you will lose the progress and photos you’ve amassed during a shoot. So watch out for the big cats when you’re out there.

Here’s something that might surprise you: Afrika’s photography element is like an advertisement for Sony SLR cameras. When you’re out on the safari, you’ll actually use specific makes of Sony cameras and lenses. All of the control and setting options for Sony cameras are available in game, too. You actually see renders of the line Sony cameras in menus, and pick up, say, the Sony a700.

I took on a mission where I had to photograph a cheetah in action. Even though this was a fast-moving subject, the challenge level was low. I followed the cheetah with my lens as he came from the distance of the desert. He was moving closer to my position as he pursued his prey, a gazelle. I was able to continue snapping off shots as he chased after the gazelle, and I managed to impress myself with some of the results. Eventually the poor gazelle was taken down by the cheetah, who then enjoyed his snack.

There’s much more game play here than what we first thought would be something closer to a tech demo. Or a child’s picture collecting game. As you play through the over 100 missions and some 60 hours of game here, you may find that you’ve learned a bit about Africa’s wildlife and photography technique. In all, Afrika is a pretty entertaining title that deserves a closer look.